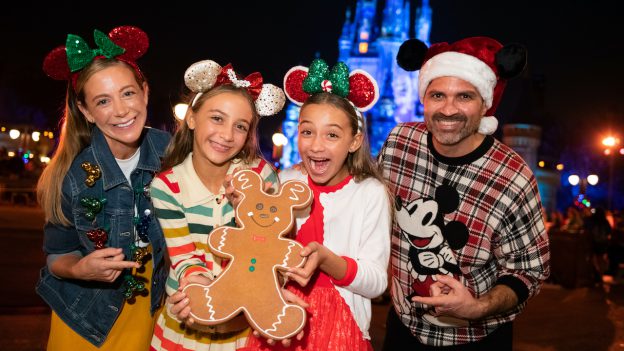 I’ve lived in Florida for many years, so I’ve become very spoiled by our pleasant weather around the holidays. I especially love visiting Walt Disney World Resort this time of year because I can enjoy a winter wonderland without having to put on layers of clothing to brave frigid temperatures. Snow boots? Not around these parts. Here I wear festive flip-flops!

But when looking at my photos taken around Christmastime at Walt Disney World Resort, you’d have no idea I wasn’t right in the middle of the North Pole. The holiday atmosphere here is so warm and cozy (and not just because of the weather!), and Disney PhotoPass photographers love making your photos even merrier with some holly-jolly props, Magic Shots, and more!

Below, check out some of my favorite photo ops available this holiday season from Disney PhotoPass Service around Walt Disney World Resort, and note where photographers will be capturing each of them.

After dark in front of the Christmas trees at EPCOT, Magic Kingdom Park, Disney’s Hollywood Studios, and Disney Springs

In the garden area in front of The Plaza Restaurant

On the bridge leading from Oasis to Discovery Island at Disney’s Animal Kingdom, on Hollywood Boulevard and Sunset Boulevard at Disney’s Hollywood Studios, at all World Celebration locations at EPCOT, at the Disney PhotoPass Studio at Disney Springs, and at the following locations at Magic Kingdom Park: entrance, the Disney PhotoPass Studio inside Sir Mickey’s, and on Main Street, U.S.A.

At most locations at all four theme parks, the Disney PhotoPass Studio at Disney Springs, and select resorts

In front of the Christmas tree at Disney’s Animal Kingdom, on Sunset Boulevard and Echo Lake at Disney’s Hollywood Studios, near the main entrance to World Showcase at EPCOT, and at the entrance and in front of Cinderella Castle at Magic Kingdom Park

In front of the Tree of Life at Disney’s Animal Kingdom, at select Hollywood Boulevard locations at Disney’s Hollywood Studios, at the Disney PhotoPass Studio at Disney Springs, and starting Nov. 25 when you meet Santa Claus at EPCOT

In the Norway pavilion at EPCOT (starting Nov. 25) and at the Disney PhotoPass Studio at Disney Springs

At the Disney PhotoPass Studio at Disney Springs

At the Disney PhotoPass Studio at Disney’s Grand Floridian Resort & Spa, near Cinderella Castle at Magic Kingdom Park, and in front of the Christmas tree at EPCOT

If you’ll be attending Mickey’s Very Merry Christmas Party at Magic Kingdom Park, don’t miss these photo ops below, which are available exclusively during the event (weather permitting).

I know that’s a lot of information, but don’t worry – you don’t need to make a list or check it twice. I always recommend asking each photographer you visit which Magic Shots and props they have available at their location. It’s the easiest way to capture a large variety of photos.

If you want to deck your halls with all these photos, consider purchasing Memory Maker. With Memory Maker, you can download all the Disney PhotoPass photos and videos from your vacation, including those taken onboard attractions – all for one price.* To learn more or make a purchase, click here.

*Disney PhotoPass Service and Memory Maker are subject to the applicable terms and policies. Includes photos taken during the applicable Memory Maker Window as defined in such terms (generally, photos taken (i) within one day for Memory Maker One Day or (ii) within 30 days from the date of first activation for standard Memory Maker). If Memory Maker is purchased at the advance purchase price, any photos taken within 3 days of the date Memory Maker is purchased are not included and must be purchased separately. A MagicBand, or an eligible mobile device with Bluetooth technology enabled for the My Disney Experience app, is required to receive certain attraction photos and other digital content. Online registration required. Disney PhotoPass Photos in your account will expire pursuant to the expiration policy. Downloads are restricted to personal use only. Not responsible for missing, lost or damaged photos. Subject to restrictions and change without notice. Valid theme park admission required for certain photo locations.