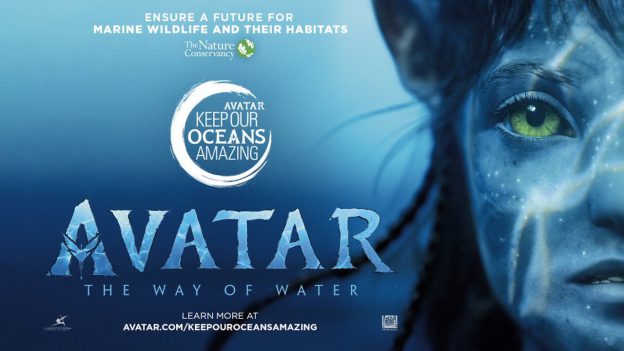 ‘Keep Our Oceans Amazing’ Campaign Launches in Celebration of ‘Avatar: The Way of Water’

In celebration of the theatrical release of the 20th Century Studios film “Avatar: The Way of Water” on December 16, Disney and Avatar launched a global “Keep Our Oceans Amazing” campaign to raise awareness of the challenges facing oceans and marine life. The campaign supports The Nature Conservancy (TNC) and its work to protect 10 of our oceans’ amazing animals and their habitats, connected to the beauty of Pandora. As part of the campaign, fans are invited to participate in celebratory experiences and products.

One of the experiences, called the Virtual Pandoran Ocean, transports fans to the wonders of the reef. Through this unique digital activation, fans can help Disney and Avatar “Keep Our Oceans Amazing” now through December 31 by creating their very own Avatar-inspired ocean creature at Avatar.com/KeepOurOceansAmazing. For every creature created in the Virtual Pandoran Ocean, Disney will give $5 to TNC, up to $1 million, to help the organization achieve its goal of protecting 10% of the ocean by 2030.

In “Avatar: The Way of Water,” audiences will be introduced to a new oceanic Na’vi clan and an array of diverse aquatic creatures, inspiring audiences to connect with the beauty of our oceans right here on Earth. Oceans cover 70% of the planet, shelter an incredible diversity of life, and provide us with food, jobs, and more than half of the oxygen we breathe. Unfortunately, less than 8% of this unique ecosystem is protected. “Keep Our Oceans Amazing” aims to extend Disney’s longstanding conservation legacy to help protect 10 amazing ocean animals and their habitats. This new initiative will support TNC to protect beluga whales, blue whales, whale sharks, hawksbill sea turtles, manatees, manta rays, parrotfish, staghorn coral, sea lions, and mangroves—coastal habitats that provide important shelter for many marine species. The specific ocean species that have been selected can be found in waters throughout the world and many of them share qualities with the Pandoran creatures and habitats featured throughout the film.

Disney has a long history of taking action for oceans and supporting the protection of marine life—from our 2030 environmental goals that include efforts to minimize greenhouse gas emissions, source sustainable seafood, and invest in the protection of our watersheds, to our funding and expertise for biodiversity protection through Disney Conservation. To date, the Disney Conservation Fund has directed more than $120 million to support nonprofit organizations working around the world to save wildlife, inspire action, and protect the planet. Nearly $20 million of those funds have been provided to programs that benefit marine life, communities, and the oceans we all depend on. This initiative is part of Disney Planet Possible, tangible actions Disney is taking to help create a healthier home for people and wildlife.

“The Avatar ethos is that we are all connected to each other and our planet, and therefore are responsible for positively impacting the people and world around us,” said “Avatar: The Way of Water” producer Jon Landau. “The ‘Keep Our Oceans Amazing’ campaign is a way for us to invite fans from around the world to join us in creating that impact.”

Global audiences were first introduced to the world of Pandora in the original “Avatar” and fell in love with the characters, the story, and the beautiful rainforests and creatures, which led to it becoming the highest-grossing film of all time. As we journey into “Avatar: The Way of Water,” audiences will be transported to an all-new biome—the reef—and will be introduced to a new oceanic clan and an array of diverse aquatic creatures.

Set more than a decade after the events of the first film, “Avatar: The Way of Water” begins to tell the story of the Sully family (Jake, Neytiri, and their kids), the trouble that follows them, the lengths they go to keep each other safe, the battles they fight to stay alive, and the tragedies they endure. The film will feature awe-inspiring scenes that showcase the vibrant bioluminescence and beauty of Pandora’s aquatic landscape— scenes that will inspire us all to consider the wonders of our own oceanic world.