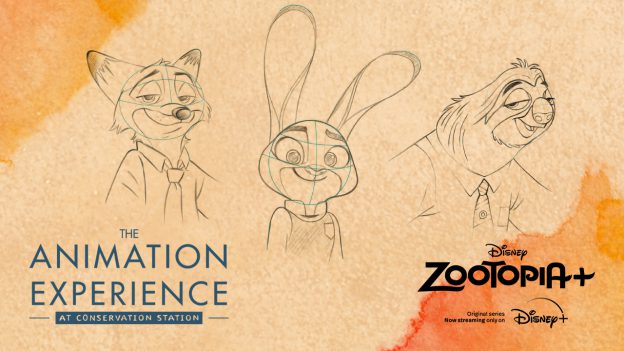 To celebrate the series premiere of Walt Disney Animation Studios’ “Zootopia+” on Disney+, guests who visit Disney’s Animal Kingdom Theme Park can now draw some of their favorite characters! You can now learn to draw some of the characters from the original Academy Award-winning film, “Zootopia,” and this new Disney+ original series at The Animation Experience at Conservation Station, located in Rafiki’s Planet Watch at Disney’s Animal Kingdom Theme Park.

Join Disney animators for a 25-minute class during which you will learn to draw Judy Hopps, Nick Wilde or Flash! The animators will guide you step-by-step in bringing these characters to life with just a paper and pencil while sharing some little-known fun facts about the world of “Zootopia” and the real-world animals these characters are inspired by.

You’ll also get to hear from the Directors of “Zootopia+”, Trent Corey and Josie Trinidad, as they share how Disney’s Animal Kingdom was a big inspiration to the filmmakers of the original “Zootopia” film and new “Zootopia+” series, both now available to stream on Disney+.

You’ll even get to see behind-the-scenes footage of research trips taken to the park that were used as inspiration for filmmakers on the film. During the experience, you can also learn more about the conservation efforts at Disney’s Animal Kingdom dedicated to protecting animals around the world.

Be sure to check out the six hilarious all-new episodes of Disney Animation’s “Zootopia+”, now streaming only on Disney+!