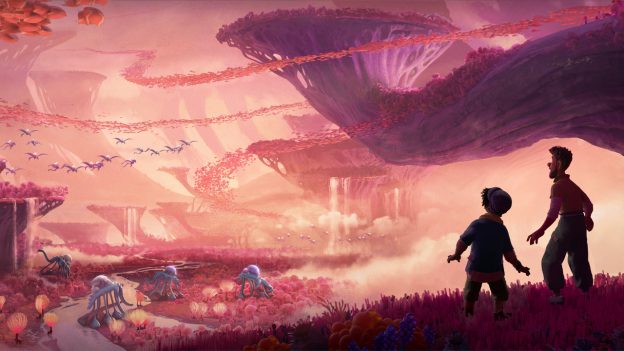 Alright, explorers– the time has come and we’re celebrating the release of the newest film from Walt Disney Animation Studios: “Strange World!” Check out all the ways you can get ready to journey to a place where nothing is as it appears…

You can now learn to draw your soon-to-be favorite blue, mischievous character, Splat, and trusty three-legged dog, Legend, when you visit Disney California Adventure Park at the Disneyland Resort! Led by Disney animators, this class at Animation Academy will teach you how to draw either of these two unique characters from the all-new film “Strange World.” No reservations needed, just check the schedule to learn to draw “Strange World” and other characters at the Disney Animation Building where you can join in the fun when space is available.

Don’t miss learning how to draw these new characters from now until January 8!

Photo-Op in Tomorrowland at Disneyland Park

For a limited time in Tomorrowland at Disneyland Park, guests can discover a dimensional backdrop that gives them the opportunity to step into the mysterious, uncharted land of “Strange World” for a photo with the mischievous blob affectionately known as Splat.

Starting today through January 8, guests can take a photo with Splat. Walt Disney World guests will find this PhotoPass offering at the entrance to Tomorrowland in Magic Kingdom, as well as at Disney Springs.

This offering will also be available on select sailings with Disney Cruise Line today through January 2.

Guests visiting can see a sneak peek at scenes from the film. Sneak peeks are now playing at Disney’s Hollywood Studios at Walt Disney World Resort, as well as Disneyland Paris and Disney Cruise Line. Learn more about the sneak peek here.

New merchandise inspired by the original, action-packed adventure is available online on shopDisney, as well as Target, Walmart and Amazon to celebrate the film’s release. The amazing voice cast of the film got a special preview of the products. Check out their reactions below!

Get ready for an epic journey with the new Disney Strange World figure collector set! Recreate your favorite scenes from the film or imagine your own new adventure stories with a great cast of characters – Searcher Clade, Meridian Clade, Ethan Clade, Jaeger Clade, Legend the Dog, Callisto Mal and two fantastical creatures – Splat and Reaper! Experience the excitement of the Clade family explorations through wondrous new lands, where they discover ravenous creatures and endless thrills. Coming soon to shopDisney, Walt Disney World and Disneyland Resort.

Experience the thrill of exploring strange new worlds with Ethan Clade and his skiff vehicle! Perfectly designed based on the movie, take your 2.5” inch Ethan figure and his 6” inch skiff vehicle on endless adventures of fun racing through your own new stories. Don’t miss out on taking this home for the adventurer in your family! Coming soon to shopDisney, Walt Disney World and Disneyland Resort.

Named by Ethan Clade, Splat is one of the weird inhabitants of Disney’s Strange World. Ethan is a member of the Clade family of explorers who embark on an incredible journey to the treacherous land. Now you can bring one of the colorful creatures home in the form of this sparkly blue Splat plush. Available on shopDisney and coming soon to Walt Disney World and Disneyland Resort.

Quench your thirst for adventure with this stainless-steel water bottle inspired by Disney’s “Strange World.” Searcher, Jaeger Clade, Ethan and Splat are featured on the colorful artwork, which shows the fantastical land and creatures discovered by the intrepid family.

“Strange World” is now playing in theaters across the U.S.