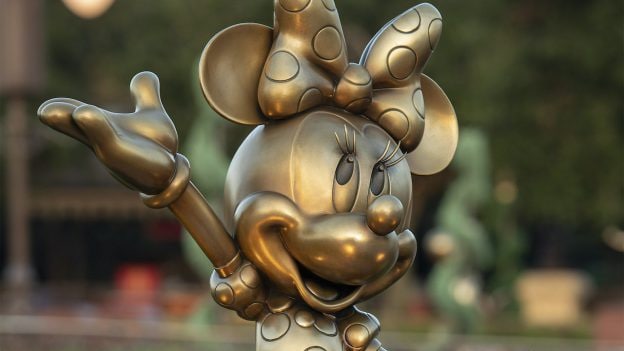 Saluting Minnie: A Mouse, Her Beau…and Her Bow!

Each November 18th, Disney fans all over the world have a unique opportunity: to observe the birthdays of two of Walt Disney’s greatest stars at the same time!

Even as we enjoy The World’s Most Magical Celebration (50 Years of Walt Disney World), these birthdays-within-a-birthday demand special attention; had that fall date in 1928 not heralded the joint debuts of Mickey and Minnie Mouse…let’s just say that things might have been very different. The little mice did, however, skyrocket to fame as the stars of cinema’s very first animated “talkie,” and they’ve been together ever since, as both on-screen co-stars and off-screen sweethearts. Appropriately, this essential, inseparable pair are side by side as usual as part of the “Disney Fab 50 Character Collection.” Countless photos have been taken of and with this golden couple–now golden in truth as they gleam beneath the Florida sunshine in front of Cinderella Castle.

Not just spoken sound, but musical sound has been part of Minnie and Mickey’s careers from the start–in fact, in Mickey’s opening scene in “Steamboat Willie” he is whistling, and when Minnie appears on the dock, her carry-on luggage is her guitar and sheet music. The following year, Mickey sang of his devotion to Minnie in “Mickey’s Follies” (1929), when he performed the song “Minnie’s Yoo Hoo,” which became the couple’s theme. “Minnie’s Yoo Hoo” was written by musician Carl Stalling and Walt Disney himself, and in 1930 became the first published Disney sheet music. Minnie also sang, specializing in popular songs of the day. She accompanied herself on piano for Irving Berlin’s 1924 chestnut “All Alone (By The Telephone)” in “The Gorilla Mystery” (1930), and cut loose with W.C. Handy’s “St. Louis Blues” with Mickey at the keyboard in “Blue Rhythm” (1931).

As the tuneful twosome’s fame grew, so too did the musical staff of the Disney studio, and more original numbers were composed for their pictures. Also, a crop of “tribute songs”, ditties written not for screen use but as popular novelties about the animated stars, began to appear. Disney happily provided art for the song sheets and phonograph recordings, making “Mickey Mouse music” a part of daily home life.

Minnie and her beau became one of filmdom’s most romantic couples; many of their rollicking adventures ended with a sweet smooch at the fade-out, and happy audiences wanted more. In 1938, many “pazoozas” were plunked down at the box-office to view “The Brave Little Tailor,” an elaborate Technicolor production–their most ambitious to date. In it, Mickey becomes an unwitting hero by outwitting a giant, much to the delight of Minnie, who portrays an adoring princess.

With the arrival of the 1940s, Mickey and Minnie continued to charm their fans, but their attention soon turned to the tasks of keeping up home-front morale and spreading useful information during the war years, While Mickey “joined up” and was a popular insignia mascot, Minnie made films such as “Out of the Frying Pan and Into the Firing Line” (1942), where she demonstrated the importance of saving kitchen waste for victory. With some help from Pluto (and very little help from mischievous kitten Figaro), Minnie also championed emergency preparedness in “First Aiders” (1944).

With the passing of Walt Disney in 1966, his two most famous characters took on even greater importance as ambassadors of happiness and creative endeavor. Mickey and Minnie added a new showcase to their resumes when they appeared in the musical Audio-Animatronics attraction, The Mickey Mouse Revue, which premiered on October 1, 1971 as an opening day wonder at Walt Disney World, “The Most Magical Place on Earth.”

Seismic shifts in fashion and entertainment were hallmarks of the 1970s, and who was not only “stayin’ alive,” but conquering the disco era? It was that most famous Disney duo, soaring to double-platinum success on the recording industry charts with 1979’s “Mickey Mouse Disco” LP. As it had at the start of their careers, music again catapulted the mice to even greater heights of popularity. In 1982, the avant-garde rock duo Sparks penned a new “tribute song,” “Mickey Mouse,” which gained quite a following. One year later, Disneyland Records requested a follow-up song for their upcoming “Splashdance” album, and the result was a catchy new wave pop ode, “Minnie Mouse,” extolling not only the star’s talents, but comparing her beauty to that of Shakespeare’s Juliet.

As new “material” came into “vogue,” Minnie had the thrill of not only headlining a new record, “Totally Minnie,” in 1986, but to see the project leap across mediums. The playful beat-driven “girl power” of “Totally Minnie” first inspired a lavish parade at Disneyland. Over 100 performers celebrated Minnie as the mouse who “brings down the house” with a stylized video shoot, proudly directed by none other than Mickey Mouse, megaphone in hand. In 1988, “Totally Minnie” became a TV special, on which the mouse of the moment warbled “Don’t Go Breaking My Heart” with Elton John!

Of course, rubbing elbows with celebrities was nothing new for Mickey and Minnie; from the start of their fame, Tinseltown legends like Laurel and Hardy, Charlie Chaplin and Greta Garbo were seen both as admiring fans and industry peers. At one glamorous gathering, documented in “Mickey’s Gala Premiere” (1933), a glittering crowd of caricatured screen folk arrive at the famous Chinese Theatre in Hollywood for a performance of what amounts to a film-within-a-film: the two-fisted “horse opera,” “Galloping Romance”, starring Mickey and Minnie. As the old saying goes, “art imitates life…” but in this case, life has imitated art, since in 2020, a tangible throng of mouse fans arrived at a duplicate of Sid Grauman’s 1927 movie palace, the famous Chinese Theatre–located at Disney’s Hollywood Studios in Florida. This time, instead of a standard premiere, the iconic theatre is host to Mickey and Minnie’s Runaway Railway, an attraction which begins with a film-within-a-filmic-experience called “Perfect Picnic.” How many other stars could accomplish such similar feats across decades, formats–and dimensions?

Beloved by their long-time fans and always making new ones, Minnie and Mickey can be found in any and all forms of media. From “Epic Mickey” and “Kingdom Hearts” to Little Golden Books and Disney Junior, they are entertainers for every age group. They are doubtlessly proud to combine fun with helpful life lessons.  Inspired in equal parts by the “Mickey Mouse Clubhouse” television program for youngsters and by Minnie’s signature polka-dotted headwear, the “Minnie’s Bow-Toons” video series of 2011 found Minnie in business with Daisy, operating a “bow-tique.” While Mickey raced roadsters demonstrating sportsmanship, a collaborative Minnie found out that “there’s no business like bow business!”

After more than 90 years in the business of happiness, Mickey and Minnie have no plans to “sail off into the sunset–” figuratively, that is. On a literal level, it’s a new and delightful duty for our multifaceted mice to take to the helms of the Disney Cruise Line fleet, and treat travelers to memorable sunsets, dawns, and destinations. Captain Mickey got his feet wet in 1998, and he was joined by Captain Minnie in 2019. In July of 2022, Captain Minnie was on the bridge of her first new command, the Disney Wish, on its maiden voyage. The Disney Wish boasts an additional tribute to its top officer: Captain Minnie’s portrait is worked into the vessel’s golden exterior filigree. Just where can her smiling face be seen? On the bow, of course!

For their ebullient good will, relentless cheer, confident optimism and open hearts, we celebrate Minnie Mouse and Mickey Mouse on their shared birthday. The celebrations will keep coming, too, every time there is a face newly alight with wonder…or a remembrance of past magic that waits to be revisited.

To these special friends we say thank you…and take a BOW!

To learn more about Minnie and Mickey and their careers, look for “Mickey: The Story of a Mouse” which arrives on Disney+ on November 18, 2022.