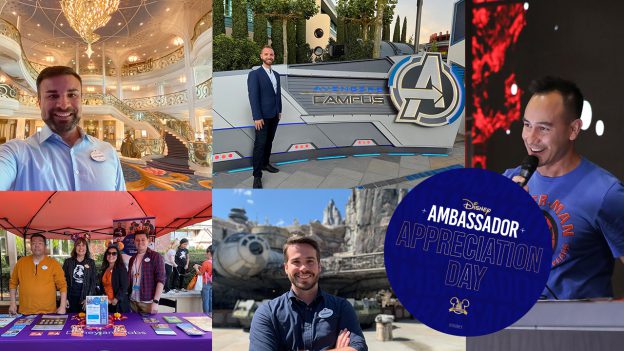 With Disney Ambassadors representing our parks, resorts and experiences all around the world since 1965, an impressive network of alumni has developed. Today we are recognizing a few Disney Ambassador Alumni who contributed in big ways in 2022 across The Walt Disney Company. This is just a small token of our appreciation to them for continuing to be amazing Disney Ambassadors well beyond their official terms.

Mikey Trujillo was serving as the Disney Ambassador when Guardians of the Galaxy – Mission: BREAKOUT! opened at Disney California Adventure park, so it’s only fitting his career has led him to work with Marvel Themed Entertainment. “As a Disney Ambassador, I learned teamwork can accomplish anything,” Mikey shared. “To think on your feet, rise up to any challenge with confidence, listen sincerely and always think of others.”

His Ambassador experience has served him well as he works on a variety of projects all around the world, including live shows, exhibits, sporting events, fan events, amusement venues and pop culture conventions. Among all the amazing things Mikey has done in 2022, he shared a personal highlight was “moderating a live drawing session on stage as two artistic masters, Adam Kubert and Brian Crosby, drew the same comic character. Since I have always loved drawing, it was a real treat to see both artists work in real time, understand their process as they went from the initial pencil stage to the final inking.”

In 2022, a personal highlight for Wendy was working at the Anaheim Fall Festival. In the morning, Wendy hosted the Disneyland Resort booth and in the evening, she joined one of the current resort Disney Ambassadors, Nataly Guzman, in the Anaheim Halloween Parade. As an Ambassador Alumni, Wendy has represented Disneyland Resort and its cast members plenty of times. “Being in the Anaheim Fall Festival and Halloween Parade was a natural extension of what I was already fully trained – and love – to do!”

During the festival, Wendy got a glimpse of a child she had met one week earlier while VoluntEARing at a First Book giveaway at the Anaheim Library. “It reminded me of how wonderful it is to represent the Disneyland Resort and be able to volunteer in Anaheim community!”

“The best part about being an Ambassador was getting to interact, shadow and meet so many of our inspiring cast, crew and Imagineers,” Nathaniel reflected on his Disney Ambassador experience, mirroring it to the work he does now on the Disney Cruise Line Recruitment team.

“Hearing their stories was not only inspiring, but the best tool anyone can have to be a better representative of The Walt Disney Company. They are the heart and soul of our company, and the best stories are the ones with our people at the core of it.”

In 2022, Nathaniel was on the front lines of selecting the next generation of crew members that create magic and happiness at sea. In June, Nathaniel had the opportunity to assist in the christening of the Disney Wish by assisting with the flow around the terminal in Port Canaveral and serving as a spokesperson conducting media and radio interviews during the sailing.

“One of the moments that got me a little teary-eyed was at the end when our crew members were waving from the balcony. Even though the ship was a bit far away their smile and energy were felt within miles.”

The World’s Most Magical Celebration at Walt Disney World was made possible by hundreds of cast members working together, including Brandon Peters who now works with Walt Disney Imagineering in New Experience Development. “One of the most rewarding parts of that season for me was preparing many of those Imagineers to engage with media guests and watching them all light up as they shared their passion and expertise about projects that they’d dedicated years of their lives to create.”

And as a Disney Ambassador, Brandon himself was in front of the camera once again, for media and press engagements. “I always enjoyed the opportunity to share stories of our cast members and the exciting new things that are always taking place at Walt Disney World.”

The opening of Avengers Campus at Disneyland Paris was a milestone moment in 2022 for Disneyland Paris and a very special one for Osvaldo Del Mistero who served as the Live Entertainment Producer for the project. Leading all technical and artistic teams as they create the next generation of live entertainment for our Disney Parks is no small feat, especially for a new themed area. “I truly believe that bringing together international teams creates great value for both projects and the involved stakeholders, fostering creativity, efficiency as well as personal and professional growth” shared Osvaldo.

“My experience as Disney Ambassador has clearly prepared me for working on projects of this scale, dealing with confidential assets and information, putting in the best resources to deliver incredible experiences for our guests and paying attention to all details to make the opening ceremony a success.”

Thank you to all our Disney Ambassador Alumni for continuing to dream, create, design and build the most wonderful places in the world and carrying on Walt Disney’s legacy. Join us in celebrating our Disney Ambassadors by sharing a memory or photo on social media and be sure to use the hashtag #AmbassadorAppreciationDay.