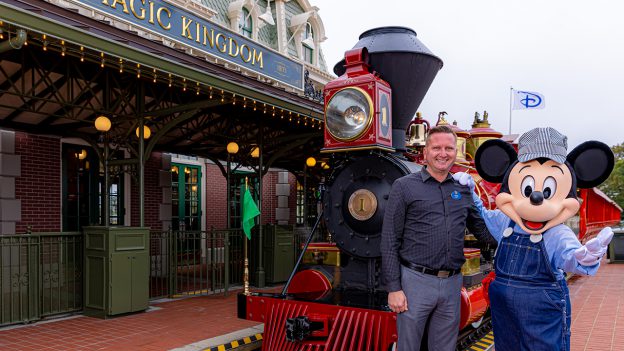 Carrying on a Legacy: The Walt Disney World Railroad Returns

From a young age, the sound of a train whistle was a familiar staple in cast member John’s life. Both his grandfather and great-grandfather were engineers on the steam trains at the Pittsburgh steel mills. John never imagined he would carry on their, and Walt’s legacy, at the Magic Kingdom Park overseeing the Walt Disney World Railroad’s historic return today.

Starting at Magic Kingdom in 1995, John’s first role was as a Conductor on the Walt Disney World Railroad. “It was this moment of serendipity,” John explains. “My grandma was so tickled that I was working on the railroad just like my grandfathers. They love to tell the story that when I was born, my grandfather was on the train and blew his whistle nonstop when he found out he was having a grandson.”

A young 17-year-old at the time, John was incredulous that he was being trusted with such an iconic piece of the park. “You can’t get more Disney than the steam train,” he says. He felt a deep connection with Walt, but also his grandfathers who had both since passed away.

Now, 28 years later, John has spent almost the entirety of his Disney career on Main Street, U.S.A. His full-circle journey has brought him to this very moment where he now oversees the operation of the Walt Disney World Railroad! The enormity of bringing these historical 100-year-old trains back to the Magic Kingdom isn’t lost on him. It’s an opportunity to introduce guests to the same feelings of whimsy and childlike wonder that made him fall in love with the park all those years ago.

“The first time cast members brought the Walter Elias train into Main Street Station, guests and cast gathered below to cheer and welcome the trains home,” John muses. “You can see the excitement on kid’s faces as they see the train coming around the corner for the first time and hear its whistle. It’s magical, and an honor to introduce the next generation to the beauty of steam trains, carrying on my family and Walt’s legacy.”

Just in time to join the Walt Disney World 50th Anniversary Celebration, we invite you all aboard this historical opening day attraction to escape into the fantastical nostalgia of yesteryear.

Folks, the renowned Walt Disney World Railroad has officially returned, and John and his team would love to welcome you aboard!