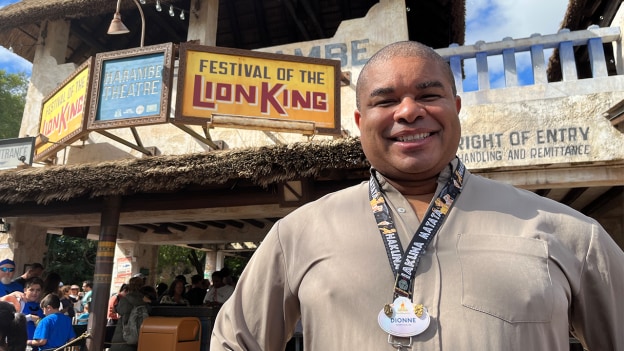 In November, Disney Theatrical Production’s “The Lion King” celebrated 25 years of Broadway performances, an accolade only two other Broadway productions have previously achieved. On screen, stage, at Disney theme parks and beyond, the story of “The Lion King” has delighted audiences since 1994, and Dionne Randolph has been a part of the pride ever since. “I’ve always said, no one has heard ‘Hakuna Matata’ more than me,” Dionne said.

While attending Morehouse College, where he studied science, Dionne decided to take an internship with the Disney College Program. “I remember my first day, we were in the Magic Kingdom Park eating at Tony’s in Town Square, and I saw a parade coming down the street and thought, ‘I’ve never seen anything like that! People actually do this?” Dionne said. “Something about the idea of entertaining as a business was so foreign.”

With the idea that he could perform for a living stuck in his mind thanks to the parade he saw that day, Dionne finished college and returned to Orlando soon after, with nothing but a suitcase and a car he bought from his cousin for $500. Soon after arriving, he landed a spot in the cast of “Legend of the Lion King” at Magic Kingdom Park, which forged his special connection with the story.

“When I did ‘Legend of the Lion King’ in 1994, I was on Pride Rock operating the Mufasa puppet and said, if this show ever goes to Broadway, I have to be a part of this,” shared Dionne. “This is something very special. It took America by storm.” In 1998, as “The Lion King” craze continued to sweep the globe, Dionne had the opportunity to join the cast of the new show at Disney’s Animal Kingdom Theme Park that’s a fan favorite to this day: “Festival of the Lion King.”

“I was just stunned. There had never been any show in any Disney theme park like this one; it was so special,” Dionne mentioned. While audiences were feeling the love in this larger-than-life celebration at Walt Disney World, Disney Theatrical Production “The Lion King” was quickly gaining popularity on Broadway and began launching their first national tour. Naturally, when the opportunity came up to audition, Dionne took it.

After months of auditioning, they called. “I’ll never forget that day. Cartwheels around the house, the whole nine. It was something I worked so hard for,” Dionne said. “It was such a blessing, it never got old. Every show was unique. Even when your body was tired. Mufasa is a very physical role.”

Dionne now plays Kiume in “Festival Of The Lion King” one of the singers that travels with Simba and his friends to celebrate the tale of “The Lion King.” As Kiume, Dionne has the special opportunity to connect with the audience, whether that’s playfully frightening people during “Be Prepared” or encouraging someone to give their best lion impression. With his connection to Mufasa (and even Scar, who he also understudied when he was with the Broadway touring cast), he clearly has a lot of fun with the role.

“Kiume is a leader, that uncle that everybody wants to be around and that person that if something goes wrong, you go and talk to. He’s that one person that people would crowd around and talk to,” Dionne shared. “And to flip from that opening and welcoming and go right into Scar, the ‘Be Prepared’ number, is very funny.”

Despite “Festival of the Lion King” being a short show, it’s clear that the heart and soul of the story rings through at each performance. “It still touches people… It’s condensed, but it’s the celebration—the claps, the cheers. That reaction of the audience you don’t hear elsewhere,” Dionne said. “It was the care that Disney put into it, and then you got the people that take care of it.”

After almost three decades, Dionne’s connection to “The Lion King” is unshakeable. “When I met Thomas Schumacher [President of Disney Theatrical Productions], I said thank you because you’ve paved my entire adult career,” said Dionne. “The big chunks of my life have been Lion King and I’m still not tired of it.”