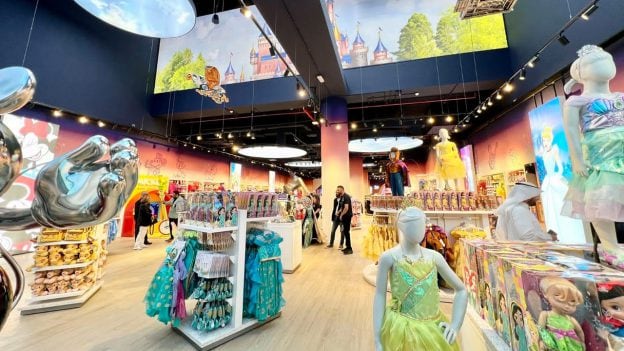 At Disney Consumer Products, Games and Publishing (CPGP), we delight in bringing the magic of The Walt Disney Company’s brands and franchises to families and fans around the world through incredible products and experiences. This November, we had the opportunity to spread some pixie dust in Kuwait by opening the first standalone Disney store in the Middle East in partnership with one of the world’s leading brand franchise operators, Alshaya Group!

To celebrate the store’s launch, I sat down with director of Consumer Products for the Middle East, Sonal Patel, to spotlight her team’s fantastic work and partnership with Alshaya Group, and her journey to working for Disney in the Middle East.

Originally from the U.K., Sonal worked for multiple retailers during and after university before landing a role in the Disney stores’ head office in London. It was ultimately her last job in the U.K. before she moved with her husband and six-month-old to the United Arab Emirates for his new job.

After taking a few years off to focus on her growing family with the birth of her second child, Sonal joined The Landmark Group, one of the largest retail organizations in the region, where she managed three of their retail brands in Dubai. She had been working in the role for just over a year when Disney called in 2014.

Sonal was excited to learn there was a Disney office in the Middle East, as it was relatively new at the time. “There was an opportunity to head up the hardlines licensing business,” Sonal shared. “It’s very different [than retail]. I knew Disney, I love the brand, and I was excited to work with partners to grow our Disney in-shop presence.”

Sonal’s relationship with Alshaya Group began in 2018, when she discussed a potential partnership with them to open over 30 shop-in-shop Disney stores in Bahrain, Kuwait, Saudi Arabia, Qatar, and the U.A.E. Disney and Alshaya Group finally signed the deal in 2020, at the height of the global pandemic. “That was tough,” Sonal told me over Zoom from her home office. “That was done from where I’m sitting now actually! We managed to sign one of the biggest deals we had in the region from home.”

Thanks to the incredible shop-in-shop partnership with Alshaya Group, Sonal and her team secured the standalone store at Alshaya’s flagship mall in Kuwait, the first Disney store in the Middle East. “Our stores represent our entire brand and help guests engage with products and staff,” Sonal explained. “It’s been very nice to drive background presence in the region and understand the cultures and how we can provide them with Disney magic that makes sense for that market.”\

Sonal had a hand in every step of the store’s creation, but she was not without help. She praised the efforts of the local MENA team, her boss and the APAC, SAMENA, and Global teams that supported the launch. “This was new to everyone, so we were all finding our feet, but we learned a lot as a team!”

As for the future of Disney stores globally, Sonal said, “The [store’s success] has definitely paved the way for future models across the regions.”