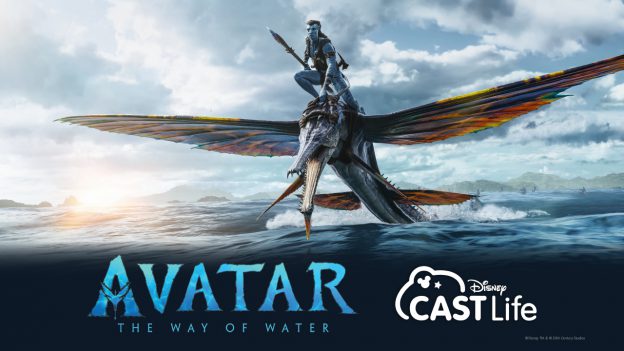 Disney Cast Life Celebrates the Opening of ‘Avatar: The Way of Water’

There’s no better way to celebrate the premiere of “Avatar: The Way of Water” at Walt Disney World Resort than creating magical moments to thank our cast members, celebrate the Disney Cast Life, and escape into the awe-inspiring and immersive world of Pandora—The World of Avatar.

Talent from the movie were thrilled to say “Kaltxí,” meaning hello in Na’vi, to a group of cast members who have brought the magic of Pandora to life since Pandora—The World of Avatar opened at Disney’s Animal Kingdom Theme Park in 2017. During this memorable encounter, stars Bailey Bass (‘Tsireya’), Trinity Jo-Li Bliss (‘Tuk’), and Jamie Flatters (‘Neteyam’) shared what it was like to be part of the Avatar story in this new film, and their experiences visiting Pandora – The World of Avatar five years ago when they were first cast in the film and when the land first opened. You could feel the excitement as film talent expressed their gratitude towards our cast for sharing the wonders of this beautiful planet with the world!

Disney’s Animal Kingdom cast members were also among the first to see the new film, “Avatar: The Way of Water!” The special advanced screening was organized to recognize cast for the incredible way they help guests discover the magic of our natural world (and worlds beyond!)—whether by climbing aboard a banshee, journeying down a mystical bioluminescent river, or connecting guests with the flora and fauna that surround them each and every day.

This screening was made even more special by a surprise shout-out from stars like Sigourney Weaver, James Cameron, and our very own Sarah Riles, Vice President of Disney’s Animal Kingdom, that debuted before the film. And that’s not all—imagine our delight seeing a special shoutout to our cast members in the credits at the end of the film!

Magic Backstage winners experienced an out-of-this-world event at the Disney’s Animal Kingdom Banshee Bash. They discovered all the Valley of Mo’ara offers while enjoying VIP access to favorite attractions like Avatar Flight of Passage and Na’vi River Journey. The night was full of fun as cast and their guests danced the night away under majestic floating mountains surrounded by beautiful bioluminescence, themed desserts, glowing drinks and so much more!

Disney’s Animal Kingdom cast were surprised with an “Avatar: The Way of Water” poster and cake cup to celebrate the movie premiere when it officially opened to introduce us to the magical underwater oceans of Pandora and the magnificent creatures who live there. There’s no better way to start off the day than with a sweet treat!

Filmmakers from Avatar were heavily involved in the creation of Pandora – The World of Avatar at Disney’s Animal Kingdom, working closely with Walt Disney Imagineering to bring this amazing world of Pandora to life. Check out what it was like for Dylan Cole, co-production designer for “Avatar: The Way of Water,” to work both on the films and the in-park land!

‘Irayo’, meaning ‘thank you’, to our amazing cast members who introduce us to worlds beyond belief and connect us with the wonders of nature every day. YOU are the magic!

“Avatar: The Way of Water” is now in theaters!