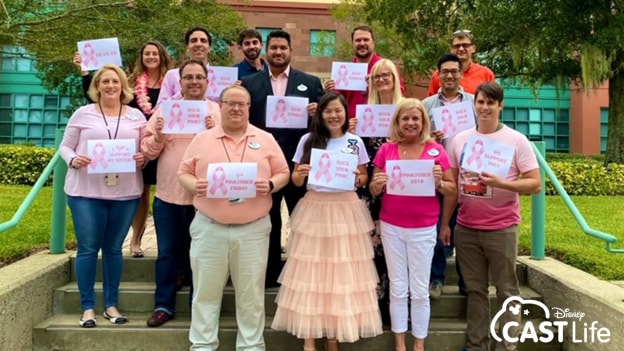 The end of the year is often characterized by holidays celebrations, but it’s also a time for many to reflect on their health and set new health goals for the coming year. Breast Cancer Awareness month has come and gone, but the importance of early detection and regular screenings should be kept in mind all year round. It is cast members like Dawn Phillips who not only raise awareness, but also raise support systems for cast members and their families who have been impacted. This rally for awareness includes a weekly Friday fashion statement featuring the official color of Breast Cancer Awareness – Pink!

Dawn’s life was drastically affected by breast cancer ever since 2006 when her sister, Minna, was diagnosed with breast cancer at the age of 42 and her mother at the age of 78. Minna had a double mastectomy and underwent numerous chemo and radiation treatments before the cancer returned in 2015 and progressed to stage 4. “Minna never gave up,” said Dawn. “I don’t know how she did it – but my sister fought extremely hard for 14 years.”

Dawn’s sister and mother passed away a week apart in April 2020, both from breast cancer. “My world completely changed in a matter of seven days,” shared Dawn. “I cherish every moment that I’m blessed with to spend with family and friends. These are moments in time that must be savored, remembered and cherished.”

Prior to the pandemic, Dawn arranged for cast members to meet each Friday in October for a group picture. “I created different signs for them to hold up,” recalled Dawn. “It was my way of reminding the cast to always think of others and to show support to their fellow cast who may have also been impacted by breast cancer in various ways.” As Dawn returned to work, she recalled how it’s important to show each other a little compassion and understanding as you never know what is going on in someone’s personal life. It’s important to make time for someone in need.

Dawn shared that she has lost one too many people to breast cancer and it’s the friendships and bonds at Disney that have gotten her through her toughest moments in life. “A fond memory that Minna and I shared was when my team recorded a personal video for her as she was going through a tough round of chemo,” shared Dawn. “What a precious memory for both of us.”

Dawn tells her story in hopes to give at least one person awareness into breast cancer and how important it is to do a monthly breast exam. Early detection is important as 1 out of 8 women are affected and 1 out of 1000 men are affected. Having a mammogram is the best way to detect breast cancer early. It’s never too early to start your own wellness checks.