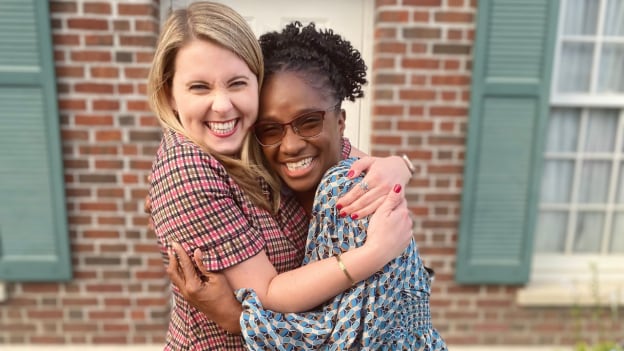 From feeling the pulse of the music radiate over her as she glides across the stage, to the beat of a camera shutter “click” as she snaps a photo in front of Cinderella Castle – cast member Lucretia (Lu) has always felt the sweet rhythm of music in her soul.

Currently a photopass leader at Magic Kingdom Park, Lu was drawn to a career at Walt Disney World because of the incredible care among cast members. “Your Disney team truly becomes your Disney family,” she explains.

Before that, she was an accomplished dancer who shared the stage with some of today’s most legendary stars. In fact, you may have even spotted Lu dancing while watching Roger and Hammerstein’s Cinderella. One of her most prized possessions is a photo of Lu alongside one of the film’s acclaimed actors.

At least it was until Hurricane Ian made its fury known across the state. Rain and water from a nearby lake flooded Lu’s home and all of her possessions were lost to mold and water damage.

Cast members rallied around Lu with unwavering love and support to help her navigate the difficulties brought by the storm’s wrath. Once the water from the hurricane receded, a member of her Disney family even joined her to survey the damage to her home so she wouldn’t have to face it alone.

While Lu remained in good spirits knowing that her material items were replaceable, she was devastated to learn her photos and accolades were also lost to the storm. To Lu, those photos represented the height of her success and the validation that she was an artist who deserved a share of the stage. With that photo gone…some of that dream felt like it was lost too.

“Being an African-American woman can be tough,” Lu says. “I feel that I am constantly having to prove myself…that I belong…that I’m worthy. My photos told the story of my life experiences. They were my proof…and now they’re gone.”

When the opportunity became available to recreate at least one of those photos, her cast members rallied around her to make some magic and bring some sparkle back to her step by planning the surprise of a lifetime: coordinating a meet and greet between Lu and a Candlelight narrator* she had taken a photo with previously but had been lost in the storm.

While it was only a moment, it represented a rebuilding of all that was lost.

“My church and Disney family have been everything to me,” Lu says. “I could never have gotten through this without them.”

From the caring elves who surprised Lu with a basket of holiday goodies and the EPCOT cast who coordinated VIP seating for Lu and her partner at the Candlelight processional, to Ambassador Ali surprising Lu with a big hug and joining her for this special evening – the night allowed Lu to leave her worries behind and immerse herself in the joy and wonder of the holiday season at Disney.

“It was truly magical and just what I needed,” Lu reminisces. “I had the opportunity to experience the magic we provide to our guests every day. To be honest, the pixie dust hasn’t settled yet.”

Disney is about more than just making magical moments for our guests; it’s just as much about making magic for our fellow cast members. Check out the video below to watch the magic and wonder of the evening unfold through Lu’s eyes.

You, Lu, are more than good enough. You are the magic. This is the Disney Cast Life.

*We are honoring the anonymity of this special guest as part of this story. You know who you are, and we thank you from the bottom of our hearts for sharing this special moment with Lu.