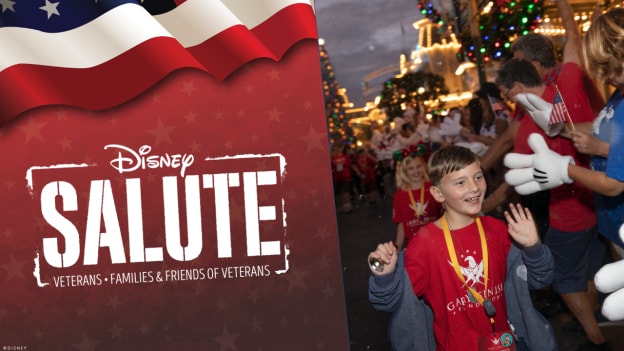 This morning, we welcomed the Gary Sinise Foundation’s “Snowball Express” program back to Walt Disney World for the first time in person since 2019 with the “Walk of Gratitude” in Magic Kingdom. At sunrise, more than 1,850 children and surviving spouses and the families of fallen military heroes were greeted by more than 1,000 Disney VoluntEARS – along Main Street, U.S.A., as they walked toward Cinderella Castle to participate in a moving ceremony to honor their fallen parents. The special Castle stage moment culminated when messages the children wrote to their lost parents were sent skyward for them to read with the help of Disney magic.

Many of the participating cast members were members of the Disney SALUTE Veteran affinity group who have either served in the military or are friends and family of veterans. Magic Kingdom Engineering Services Manager and U.S. Air Force veteran, Michelle Imperial said there was no way she would miss the opportunity to be part of this special event to thank military families.

“As Disney cast members, it’s an honor for us to welcome the families of those who have paid the ultimate sacrifice for our safety and freedoms,” said Michelle. “Support for our military families is an essential part of our Disney culture. We are grateful we get the opportunity to give back to those who selflessly serve and help create new memories for these children that we hope last a lifetime.”

The Snowball Express is a five-day healing retreat that serves the children of fallen military heroes, surviving spouses, and their families. Throughout the annual event, these families have an opportunity to bond with the only people who can truly understand their loss: one another.

Snowball Express was started after the publication of a letter from a soldier to his wife. U.S. Army Private First Class Jesse Givens had left the letter behind when he deployed to Iraq, instructing her in a note on the envelope to only open it if something happened to him. Following his death in Iraq while serving during Operation Iraqi Freedom May 3, 2003, his wife opened the letter. It conveyed how much he loved his family and the things that he wanted them to do. Among his requests was that his wife make sure she took their children to Disney Parks.

After the letter was published, readers believed hundreds of other families were in the same situation and took the families to Disneyland Resort in 2006 as most participants lived in California. Gary Sinise became involved with Snowball Express a year later where he would volunteer his band The Lt. Dan Band to perform every year since. As the event grew larger, it moved to Dallas/Fort Worth, Texas in 2009. The program officially became part of the Gary Sinise Foundation in 2017 and moved to Walt Disney World Resort in 2018.

“While our hearts are heavy at the circumstances that brought these families together, I am grateful we can honor them, remembering their loved ones who are no longer with us, as we wrap our arms around each and every one of them,” said actor and humanitarian Gary Sinise. “As we approach the holiday season, I am so glad that for the first time since our amazing event in 2019, we are once again able to bring these deserving families together to create new and wonderful memories at the most magical place on earth, Walt Disney World Resort.”

The Walt Disney Company has a longstanding tradition of support for the U.S. Armed Forces and their families. Opportunities like this one gives a chance to our cast members, many of them Veterans themselves, to give back to our community especially during this holiday season.