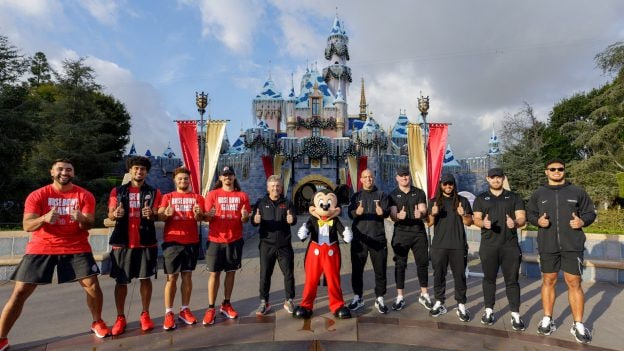 Yesterday, Utah and Penn State made their first stop on their way to the 2023 Rose Bowl Game in Pasadena, California, with a traditional visit to the Disneyland Resort. Before meeting on the field, the teams joined for their first official pregame appearance: a festive cavalcade on Main Street, U.S.A., in Disneyland park.

Additional participants were 2023 Rose Queen, Bella Ballard, and the 2023 Royal Court as well as The Pasadena City College Tournament of Roses Honor Band.

Following the cavalcade, coaches and players were hosted in the historic Opera House on Main Street, U.S.A., for media interviews, then commemorated their visit with a group photo.

Be sure to tune in for the exciting events!

The 134th Rose Parade will be broadcast nationally, live on ABC at 8 a.m. PT/11 a.m. ET on Jan. 2. Mickey Mouse and Minnie Mouse will be on the parade route to deliver the iconic “football toss” over to the Rose Bowl.

And the 109th Rose Bowl Game featuring the No. 8 University of Utah against the No. 11 Pennsylvania State University will air at 2 p.m. PT/5 p.m. ET on Monday, Jan. 2, on ESPN and the ESPN app. Tune in to the game to see Mickey and Minnie deliver the game ball prior to kick-off!