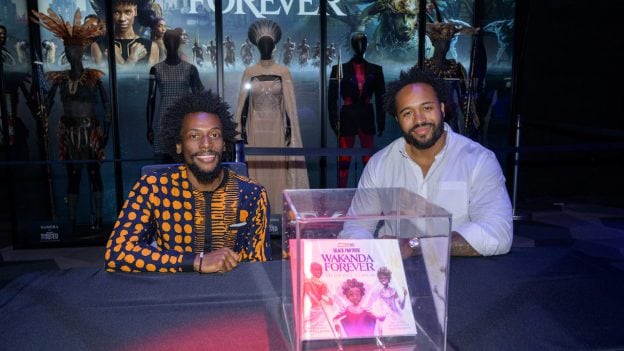 The story follows a girl named Assata, a young Wakandan who dreams of becoming one of the Dora Milaje warriors who protect Wakanda. But because Assata has a rare disease that the technology in Wakanda cannot cure, she lets go of her dream. Assata’s light shows through all the same, leading her to surprising new friends: the princess Shuri, the warrior Okoye, and the powerful M’Baku. However, only Assata can give herself what she’s missing: the courage to dream.

“Our goal in creating “Black Panther: Wakanda Forever: The Courage to Dream” was for young people to have the same feeling as when they saw the first “Black Panther” film: to see themselves. My hope is for people to read this book and feel seen and loved,” Frederick shared in a recent interview.

Nikkolas similarly hopes the book will challenge people to look past any roadblock standing in the way of their dreams, sharing, “whatever obstacle is in your way that you feel you can never move, take that challenge and create vibranium-infused rocket ships out of it. Make that obstacle the thing that propels you into the future.”

Check out Frederick and Nikkolas as they share the inspiration behind the book and what they hope people take away from it.

Frederick and Nikkolas recently made several appearances across Disney Parks and Resorts to share the book with fans, beginning with a sailing aboard Disney Cruise Line to announce new characters from “Black Panther” coming to select “Marvel Day at Sea” sailings. Check out the announcement below!

They then stopped by Disney Springs to surprise fans at the opening night event for “Black Panther: Wakanda Forever” with personally signed copies!

The celebration of the film and the book continued at the Disneyland Resort with a special Disney Book Fair in the Downtown Disney District. The day started with Nikkolas and Frederick meeting PULSE and ENABLED BERG (Business Employee Resource Group) cast members by a mural illustrated by Nikkolas, titled “Forever Ever,” which is inspired by the themes of determination and ingenuity present in both the film and their book. The mural will be on display for a limited time at Downtown Disney until late January 2023.

Later that day, they joined other authors to celebrate the joy of reading and National Literacy Month at a Disney Book Fair event. Nikkolas and Frederick took turns reading their inspiring book, followed by meet and greets and signings around the Downtown Disney District and Disney California Adventure park.

“Black Panther: Wakanda Forever: The Courage to Dream” is now available wherever books are sold. Get your copy today!