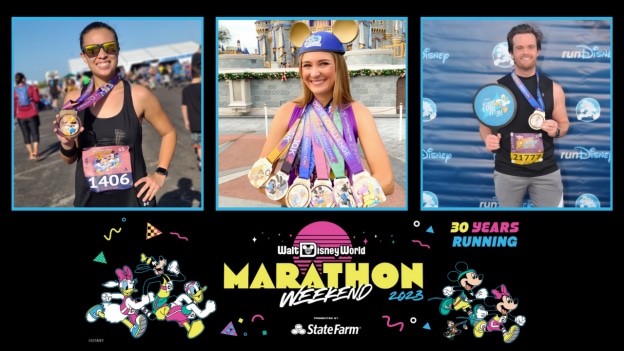 This week, tens of thousands of athletes will lace up their shoes to celebrate 30 years of running as the 2023 Walt Disney World Marathon Weekend kicks off. That’s three decades of support from our totally rad cast members! Even though I wasn’t here for the first marathon in 1994, it’s an incredible feeling to be celebrating such a large milestone by bringing back the ’90s! Get ready for a blast from runDisney’s past and the most epic ’90s experience, with iconic characters, retro vibes and our favorite ’90s gear. After all, where else can you crush your goals by running through four theme parks while wearing a fanny pack, butterfly clips and neon colors?

To help celebrate, I asked a few cast members to take a stroll down memory lane:

In 1999 and 2002, attractions cast member LuAnn participated in the Walt Disney World Marathons. She and a group of her friends decided to make running marathons an annual trip and Walt Disney World was the perfect destination to start. Years later and now a cast member herself, she supports the athletes through their races by handing out medals as athletes cross the finish line. She says she does this because it brings back her fondest memories.

“You are on such a high at the end of 26.2 miles and there is such a sense of accomplishment after months of training with your best friends.” Even though LuAnn will be retiring from her role at Walt Disney World after the 2023 runDisney Springtime Surprise Weekend, she says that she’s had the time of her life supporting the races and “dreams really do come true.

Like LuAnn, many of our cast members make magic along the course during runDisney races, but our PhotoPass photographers are the ones that literally capture the memories. Speaking for myself, there’s something special about having a photo of myself crossing the finish line and it’s a memory I’ll cherish forever.

As a PhotoPass cast member, Renees loved cheering on athletes and capturing their accomplishments. Last year she was near the 20-mile marker and witnessed many people achieving their goals on the way to the finish line.

“The past few years I have been working on the course, but this time around, I’ll be joining them!”

As an avid runner throughout high school, cast member Summer completed her first marathon at Walt Disney World at the age of 18. Flash forward 10 years later to this weekend, when she will complete her 76th runDisney race.

“These races have gotten me through tough times in my life, created amazing memories for me and will always be a huge part of my life.”

runDisney races have even become a part of some love stories. In 2013, cast member Alyssa, participated in both the Walt Disney World Marathon and the Disneyland Half Marathon with her then-boyfriend and medals weren’t the only bling Alyssa would be getting. While in Disneyland Resort, during an onstage interview, her now-husband got down on one knee and proposed.

“I said yes and then ran 13.1 miles with him full of adrenaline and excitement over what had just happened. runDisney played a big part in our love story and we will be forever grateful for all the memories and magical miles!”

Congratulations to all our cast members who have been a part of 30 years of running! If you’re celebrating your first race or your 100th; running the course or cheering others along, I can’t wait to see you this weekend. Here’s to 30 more years!

Stay tuned to the Disney Parks Blog for race weekend highlights and be sure to share your race photos with us using #DisneyCastLife.