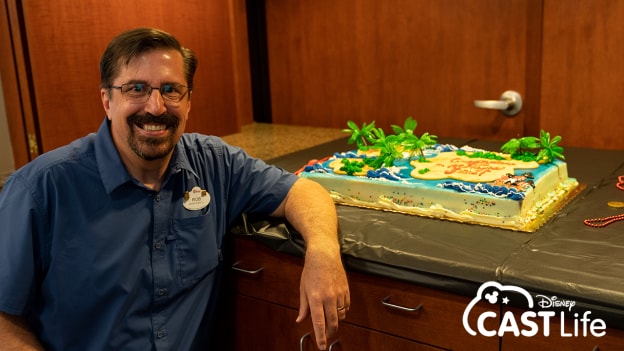 Disney Institute Engagement Manager Rob Morton is retiring from Disney next month, culminating his remarkable career with the company that spans nearly 44 years.

Rob began his Disney journey in 1979 working in attractions at Magic Kingdom Park, first at Pirates of the Caribbean and followed by Jungle Cruise. Today – and for the last 27 years – he is part of Disney Institute’s delivery and advisory services team, helping individuals and organizations around the world learn the Disney approach to guest experience and how to apply it to their own businesses and professional lives.

He recently sat down with us for a Disney Parks Blog Cast Life interview to discuss highlights from his impressive career that spanned decades and continents. Rob also shared fun facts about the company, and leadership and career advice he learned along the way that he hopes other cast members will find useful in their professional journeys.

Of the many leadership lessons he learned while at work, Rob listed out the top insights that have always stuck out to him:

“If you really want your dream job, you need to treat every job you have like it is your dream job,” said Rob. “In my early years, I had a leader tell me, ‘Whatever you’re asked to do, be the best there ever was.'”

Rob recalls that when he first began working in 1979, he had leaders who had worked with Walt Disney. “They shared first-hand stories about what was important to Walt and so much of that is still important to us today,” shared Rob. “This helped me in my role as a storyteller.”

While there are countless memories over the course of almost 44 years of working at The Walt Disney Company, one of his clear favorites was having his two-year-old son, Stephen, present him with his 25-year service award pin in front of 150 people. Outside of that, “It was the opportunity to represent Disney Institute for over four years in Singapore, while living there with my family. The experience gave us all memories that will last a lifetime.”

Of his many reflections, he says, “We talk about Walt almost like he’s still in the room. I can honestly say that what was important to Walt is still important to our organization and company a century later. That really sets us apart… what we do every day is magic.”

To learn more about Rob’s career, read more on the Disney Institute blog.