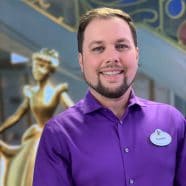 Danny Handke is a senior creative director for Walt Disney Imagineering, where he is responsible for creating and developing stories and ideas for Disney parks and cruise ships from concept to completion. On the Disney Wish project, Danny is leading the creative direction and story development for Worlds of Marvel, AquaMouse, Star Wars: Hyperspace Lounge, Arendelle: A Frozen Dining Adventure, Disney’s Oceaneer Club, and more.

Danny has worked for The Walt Disney Company for 18 years. His recent projects include Guardians of the Galaxy – Mission: BREAKOUT! at Disney California Adventure, the integration of Marvel and Star Wars in Disney’s Oceaneer Club across the Disney Cruise Line fleet, and several blue sky projects for Disneyland Resort, Tokyo Disney Resort and Hong Kong Disneyland. He is also the co-author of the book Poster Art of the Disney Parks for Disney Editions.

Share How to Travel to a Galaxy Far, Far Away Aboard a Disney Ship