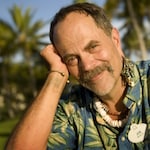 Joe Rohde is a portfolio creative executive for Walt Disney Imagineering. In this role, Joe is responsible for leading the creative development for Disney’s Animal Kingdom at Walt Disney World Resort, Aulani, A Disney Resort & Spa in Ko Olina, Hawai’i, and the Marvel franchise portfolio.

Joe started with the company more than 30 years ago as a model designer on Epcot. Joe later led the team that conceptualized, designed, and built Disney’s Animal Kingdom. He was also instrumental in the development of the Disney Worldwide Conservation Fund, which has allocated over ten million dollars to projects around the world.

#DisneyMagicMoments: The Rohdes, Less Traveled: Ageing and Patina in Storytelling

#DisneyMagicMoments: The Rohdes, Less Traveled: Inside the Design and Inspiration of Disney’s Animal Kingdom Theme Park