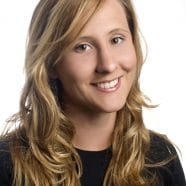 My Disney career has been an incredibly exciting and unforgettable bi-coastal journey that began inside the New Amsterdam Theatre as an intern with The Lion King on Broadway! After a semester in the Big Apple, I left the Mouse House for a bit but couldn’t resist the magic and returned less than two years later to work in communications and PR for books, magazines, and digital storytelling experiences. In 2012, I was given the chance to relocate to Burbank, California, to work for Disney’s consumer products business and have worked in a bunch of different communications roles ever since. Right now, my focus is on public affairs, internal, executive, and partner communications for consumer products, publishing, and games.

One of my many favorite Disney memories was my northern European adventure aboard the Disney Magic in 2017—it was an odyssey to eight amazing countries that I will never forget.

Introducing the Mickey & Co. Collection – Made with Recycled Fiber from Plastic Bottles Collected in Part from Walt Disney World Resort