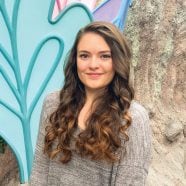 My Disney career began in 2014 when I was hired into a merchandise role at Disney’s Hollywood Studios for a summer job while I was in college. Since then I’ve been lucky enough to support the openings of Toy Story Land and Star Wars: Galaxy’s Edge and meet so many incredible cast members along the way through a variety of communications roles. I love celebrating the people who are at the heart of the magic and I’m grateful to be able to do that in my current role every day! In my free time, you might find me taking a stroll around Disney’s Coronado Springs, enjoying a viewing of Impressions de France at EPCOT or grabbing a carrot cake cookie before spending some time with my favorite resident of Disney’s Hollywood Studios, Dinosaur Gertie!