Did You Miss It? The Disneyland Attraction That’s Millions of Years Old

Look closely in Frontierland and you’ll find a rare geological artifact – the remains of a petrified tree that is believed to be between 55 million and 70 million years old! Did you miss it on your last trip to Disneyland Park? If you’ve seen it, did you know the tree was a present from Mrs. Walt Disney?

Here’s the story: On July 11, 1956, Walt Disney purchased the remains of a petrified tree that once stood 200 feet tall from the Pike Forest Fossil Beds, a privately owned petrified forest area in Colorado that is now part of Florrisant Fossil Beds National Monument. Walt arranged for the tree to be sent to California. More than a year later, Lillian Disney presented the tree to Disneyland Park, reportedly saying that the tree was “too large for the mantle” at home. 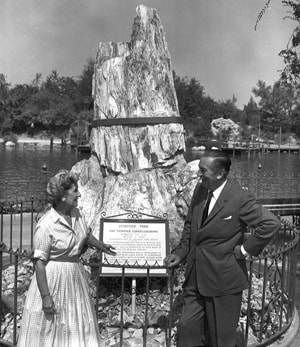 The photo above shows Mr. and Mrs. Disney in September 1957, at the time the gift was presented to Disneyland Park. 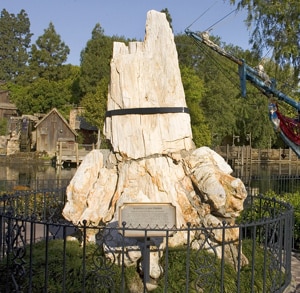 The rest of the story can be found on the plaque inscription, which reads:

PETRIFIED TREE
FROM THE
PIKE PETRIFIED FOREST, COLORADO
THIS SECTION WEIGHS FIVE TONS AND MEASURES 7 1/2 FEET
IN DIAMETER. THE ORIGINAL TREE, ESTIMATED TO HAVE
BEEN 200 FEET TALL, WAS PART OF A SUB-TROPICAL FOREST
55 TO 70 MILLION YEARS AGO IN WHAT IS NOW COLORADO.
SCIENTISTS BELIEVE IT TO BE OF THE REDWOOD OF SEQUOIA
SPECIES. DURING SOME PREHISTORIC ERA A CATACLYSMIC
UPHEAVAL CAUSED SILICA LADEN WATER TO OVERSPREAD
THE LIVING FOREST. WOOD CELLS WERE CHANGED DURING THE
COURSE OF TIME TO SANDSTONE. OPALS WERE FORMED
WITHIN THE TREE TRUNK ITSELF.

On your next trip, look for this artifact along the banks of the Rivers of America near The Golden Horseshoe.

Unique stories about Disneyland Park and its history can be told through a variety of historical photos. Check back on the Disney Parks Blog in the coming months for more photos that help tell these interesting stories.

Likes (9)
Share Did You Miss It? The Disneyland Attraction That’s Millions of Years Old

Destinations: Did You Miss It? The Disneyland Attraction That’s Millions of Years Old