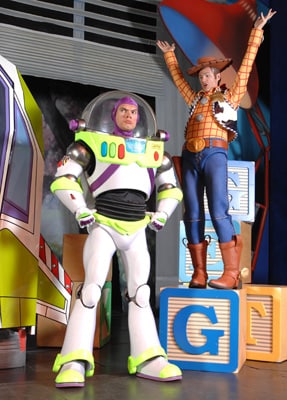 If you love musicals as much as I do, then you’re going to be thrilled with today’s news.

“Toy Story – The Musical” will take over Hyperion Theatre in Disney’s California Adventure park in early 2011.

The characters and playful plot from the original Disney•Pixar film, Toy Story, will come to life before your eyes in this dazzling, musical stage spectacular where you’ll be treated to a unique “toys’ eye view” of life in Andy’s room. The stage show will feature larger-than-life set design, new songs, vivid projected backgrounds and elaborate costumes.

The 50-minute musical will preserve the humor and heart of the original film and will explore the true meaning of friendship as Buzz Lightyear and Woody transform from jealous adversaries to best friends with an unbreakable bond.

To make way for this exciting addition to Disney’s California Adventure park, “Aladdin – A Musical Spectacular” will close August 15, 2010. If you’re visiting the Disneyland Resort this holiday season, don’t miss your chance to catch this great show.

“Toy Story – The Musical” is just the latest announcement of a line-up of great attractions and experiences coming to Disney’s California Adventure. To find out about all the new things coming to the park, check out DisneysCaliforniaAdventure.com.

What do you think? Are you excited about “Toy Story – The Musical?”