Today the Alabama Crimson Tide and the Texas Longhorns face off in the National Championship game in the Bowl Championship Series. The teams made their first media appearance of BCS week on Saturday, January 2 when the teams visited the Happiest Place on Earth. Players from both teams experienced attractions at the Parks, and coaches from the teams fielded questions from media at the press conference at ESPN Zone in the Downtown Disney District. Below is a photo of Heisman Trophy winner Mark Ingram of the Alabama Crimson Tide arriving at the Downtown Disney District. On December 26, the BCS-ranked No. 8 Ohio State Buckeyes and No. 7 Oregon Ducks made their first official appearances of the Rose Bowl week and met in front of Sleeping Beauty Castle to celebrate the New Year’s Day game. The teams were honored in a brief ceremony, and Ohio State Coach Jim Tressel and Oregon Coach Chip Kelly were awarded crystal replicas of Sleeping Beauty Castle in recognition of their achievement as competitors in the 2010 Rose Bowl Game. After the ceremony, players from both teams enjoyed the thrill of the Matterhorn and the whimsy of the Tea Cups. 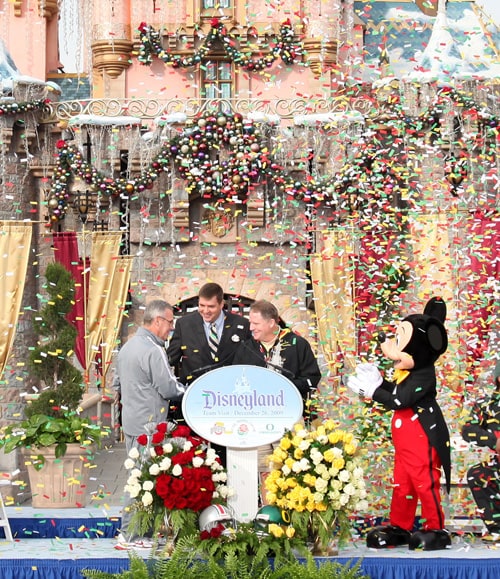