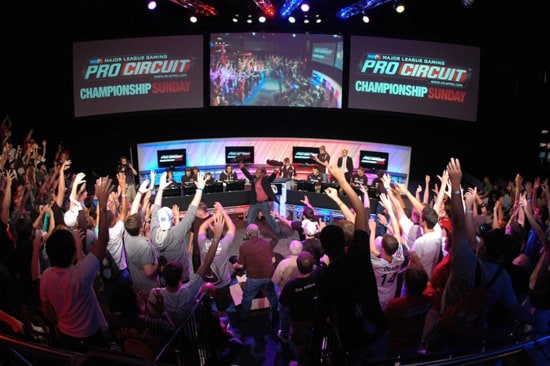 If you think you’re a video game whiz, wait til you see the pros play. The Major League Gaming Pro Circuit season kicks off this weekend at ESPN Wide World of Sports Complex at Walt Disney World Resort and features the top video game players in the country.

Spectators can roam around the Jostens Center at the sports complex and watch the fast-fingered pros and top amateurs go head-to-head in a variety of popular video games such as Halo 3, Super Smash Bros. Brawl and Tekken 6. There are even opportunities to actually try your skills against a pro gamer.

There’s a main stage where the marquee players battle it out throughout the day. There’s cheering. There’s a little trash talking. And there’s a lot of activity with more than 2,000 gamers and roughly another 8,000 spectators.

There is a lot riding on these competitions, too. Not only is there more than $700,000 in season-long prize money up for grabs, but perhaps more important, there’s the title of MLG Champion on the line.

In addition to the competition, the event is a virtual mecca for video game lovers with autograph sessions, product demonstrations and contests for video game enthusiasts of all levels. But nothing would be sweeter for a fan than to actually whip the pants off one of the pros.

If you’re up to the challenge or if you just want to watch, get your weekend long spectator pass for $25 at the ESPN Wide World of Sports Complex box office and follow @DisneySports for the event schedule.