America Sings? Main Street Electrical Parade? Bear Country? America on Parade? What New Attraction or Show do You Think was Most Impressive at Disneyland Park Between 1971 and 1975?

Have you been following our countdown to the 55th anniversary of Disneyland park? This is the 8th post in an 11-part series in which we look back at a different half-decade every week. This week, we’re looking at 1971-1975.

I spoke with my colleague and Disney Parks Blog contributor, George Savvas, and I really enjoyed hearing about one of his first memories of Disneyland park, which was largely influenced by America Sings. 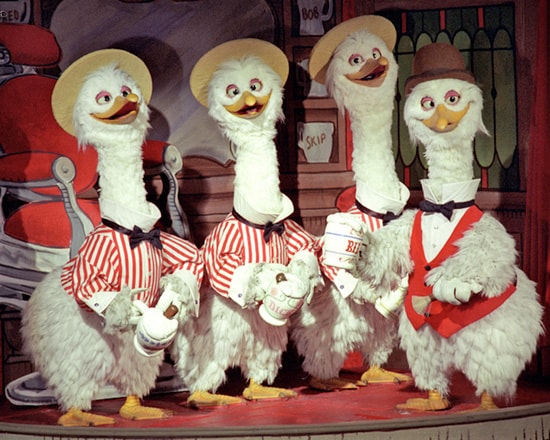 George recalls, “I came to see it on a field trip with my elementary school. It made such an impression me. I had never seen anything like it before. When I think of it now, I’m not sure I’d have ever heard many of those songs if I hadn’t seen America Sings over and over again through the years. I still remember all those songs even now! The best part was the finale – there were so many characters on stage. Every time I’m over at Innoventions I remember Sam and that school field trip – oh, and the weasel, of course.”

Before you pick the attraction that you think is the most impressive addition between 1971 and 1975, read about what else happened during these years.

1975 – Disneyland park celebrated its 20th anniversary and began a 15-month salute to the U.S.A. Bicentennial with the most elaborate parade in the park’s history – “America on Parade,” which featured 50 floats and 150 giant performers at least eight feet tall, in addition to an all-new red, white and blue fireworks spectacular “Fantasy in the Sky.” Disneyland park welcomed back Christine Vess Watkins and Michael Schwartner, the park’s first visitors in 1955. Mission to Mars, an updated version of Flight to the Moon, was an exciting journey deep into space, since man had already reached the moon in real life. Great Moments with Mr. Lincoln returned to Main Street, U.S.A. as a featured part of The Walt Disney Story.

1974 – Disneyland park was featured in two televised specials, “Sandy in Disneyland” starring Sandy Duncan, in April, and “Herbie Day at Disneyland” in July. In Tomorrowland, America Sings, a humorous musical review, opened in the Carousel Theatre with a cast of 110 comical Audio-Animatronic animals singing America’s favorite heritage folk music and campfire tunes led by emcee Sam the Eagle. It replaced General Electric’s Carousel of Progress. The Main Street Electrical Parade entertained millions of summertime visitors, as did the All-American College Marching Band and a new addition, The Kids of the Kingdom. Special events included Alice in Wonderland Days, Viva Mexico, Disneyland and All That Jazz, “Herbie Rides Again” Days, and “Winnie the Pooh and Tigger Too” Days.

1972 – Disneyland park added Bear Country as a seventh land on the far corner of Frontierland. A new production of Walt Disney World, Country Bear Jamboree, was brought to Disneyland park, and new eatery Hungry Bear Restaurant opened. What was to become the most popular entertainment feature in all Disney parks, the Main Street Electrical Parade, debuted as a major summer nighttime feature with millions of tiny lights creating images from Disney animated film classics. Winnie the Pooh campaigned for president with a red-white-and-blue parade and pep rally on Main Street, U.S.A. Rock ‘n Roll Reunion sparked September entertainment with Frankie Avalon, Chuck Berry, The Drifters and The Platters. Disneyland Hotel opened a $7.2 million Convention Center with a 29,000 square-foot exhibit hall and an 18,000 square-foot Grand Ballroom.

1971 – An amazing attendance mark was recorded when Disneyland greeted its 100-millionth visitor in just under 16 years. The lucky 100-millionth guest Valerie Suldo from New Brunswick, N.J., came through the gates on June 17, launching a summer-long celebration of entertainment called “Year of One Million Smiles.” The world’s biggest New Year’s Eve party was celebrated with 23,000 guests on hand, the largest number in Disneyland history. New in Frontierland, Davy Crockett’s Explorer Canoes were introduced as a way to see the Rivers of America. The year marked the debut of the first All-American College Marching Band. During the four-day President’s Holiday in February, the park rolled out lavish red-white-and-blue “I Am an American” ceremonies in Town Square. Sadly, the year ended with the death of Roy O. Disney on Dec. 20. Walt Disney’s brother was co-founder of Walt Disney Productions and chairman of the board.

Which of these attractions do you think made the biggest impression between 1971 and 1975? Do you have a personal favorite?

If you missed the previous 7 stories in which we looked at the milestones between 1976 and 2010, click the “Countdown to 55” tag below to get caught up.

Likes (0)
Share America Sings? Main Street Electrical Parade? Bear Country? America on Parade? What New Attraction or Show do You Think was Most Impressive at Disneyland Park Between 1971 and 1975?

Destinations: America Sings? Main Street Electrical Parade? Bear Country? America on Parade? What New Attraction or Show do You Think was Most Impressive at Disneyland Park Between 1971 and 1975?