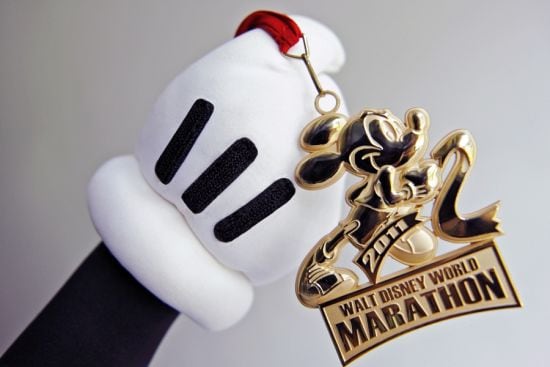 Today, we take a look forward and a quick look back at the new runDisney series of endurance events.

Three of the weekend’s featured events — the Walt Disney World Marathon, the Half Marathon and Goofy’s Race and a Half Challenge — are more than 90 percent filled, so athletes wanting to run these magical miles should sprint (not jog) over to runDisney.com for the latest registration information. There’s even a new Mickey Mouse medal for Marathon finishers this year.

While at runDisney.com, you can even learn from one of the most famous marathon trainers in the U.S. — former Olympian Jeff Galloway. Jeff has been running more than 40 years — that’s a lot of miles! — and has loaded the site with training videos, tips and even printable training programs.

Finally, as we look ahead to the Walt Disney World Marathon Weekend, let’s take a quick look back at Disney’s Wine & Dine Half Marathon, our most recent runDisney event. Starting at 10 p.m., this late-night race ended with a post-race party at Epcot World Showcase.

Gary, our “Grape-on-the-Go,” took on the 13.1 miles wearing a special costume, an homage to the inaugural endurance event and the “spirits” of the Epcot International Food & Wine Festival.

Take a look at the latest runDisney fun, and let us know in the comments if you’ve ever conquered one of the endurance races at Disneyland or Walt Disney World.