In the course of the exciting work being done on Main Street, U.S.A., at Disneyland park, a piece of Disneyland history was opened up yet again. Fans of the Main Street Arcade are familiar with its Welte Orchestrion – the large self-playing pipe organ that has entertained guests for decades. While the arcade is closed as part of the current Main Street, U.S.A., refurbishments, the Disneyland Electromechanical team is taking the opportunity to perform maintenance on this impressive instrument – which is older than the park itself. But you might be surprised at what is found inside … Since 1945 – thirty years after the instrument was first built – those working to repair and restore the Orchestrion have signed their names to an interior panel, and the tradition has continued to this day. Dave Allan, an electromechanical technician at the Disneyland Arcade Shop (which cares for all of the resort’s electromechanical devices – from coin-operated machinery and popcorn carts to park turnstiles and FASTPASS machines) first came to work at Disneyland more than 35 years ago to work on the Orchestrion. He first signed is name to the instrument in 1974, as you can see in the photo above. 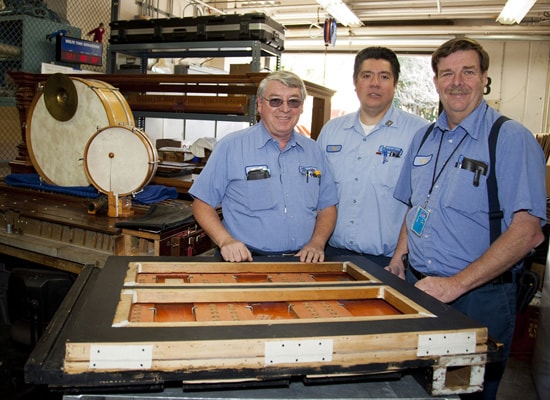 I visited Dave and his colleagues Ken Knibb, Joel Viado and Jeff Garcia late last year at the Disneyland Arcade Shop for the rare opportunity to see this giant machine being cared for by these talented technicians. Though it has been through maintenance before, those times have been surprisingly rare. 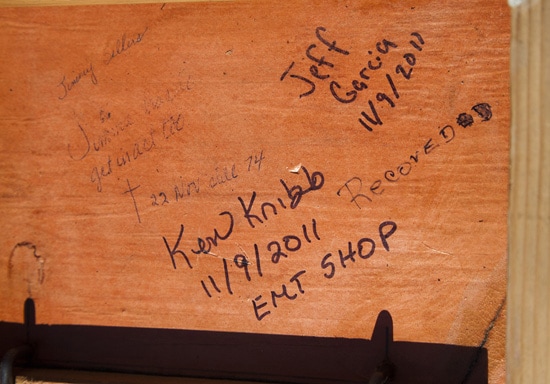 “It probably won’t be opened again for another 30 years,” Ken told me. The instrument still has it original acoustics and pipes, but the team is working to restore it to as close as possible to original condition while still being able to be enjoyed by guests daily upon its return to the Main Street Arcade. When it does return, it will feature more of the original music that it was first designed to play.

Be sure to check out the Welte Orchestrion when it returns in its full glory to the Main Street Arcade later this spring. And I’ll be back soon with an update on this amazing piece of Disneyland history when Dave, Ken and the Disneyland Electromechanical team are all finished with it – for the next 30 years, at least.