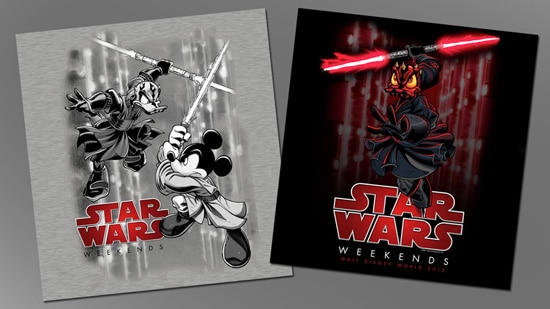 A little while ago, I gave you a peek at some Star Wars Weekends merchandise. Today, I have selected a few of my favorite items coming soon to “Darth’s Mall,” a massive shopping location we’re creating just for Star Wars Weekends.

The striking image of Donald Duck as Darth Maul is a common thread throughout the entire assortment. The artwork above will be used on the two main logo shirts. We will also have shirts with images of Darth Maul from Episode I, including a stunning Passholder exclusive shirt in both men’s and women’s styles. I spent hours around the office, however, wearing one of the best shirts this year — a tee shirt with an image of Darth Vader’s chest, complete with a flowing, detachable cape. 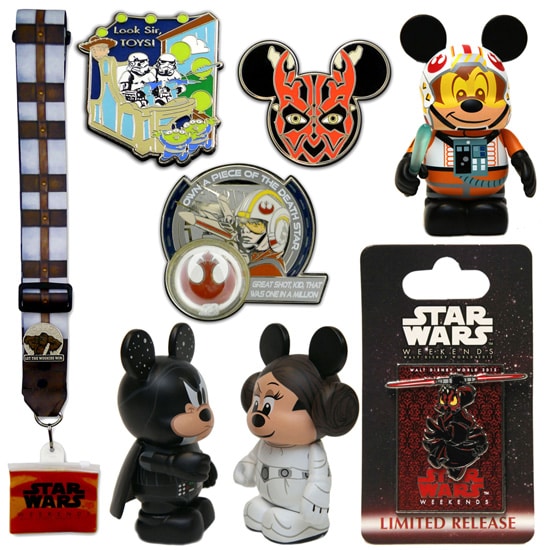 Similar to previous years, there will be open and limited-edition pins, boxed pin sets and a framed pin set. I enjoy the humor found in the “Piece of Death Star” pin (there is not an actual piece, but one can dream). I also like the Chewbacca-inspired, bandolier neck lanyard.

In the Vinylmation galaxy, Maria Clapsis designed six new open edition figures that feature Disney characters portraying Star Wars characters. If you are looking for the second limited release mystery series, you will have to wait until August (trust me, it will be worth it!). 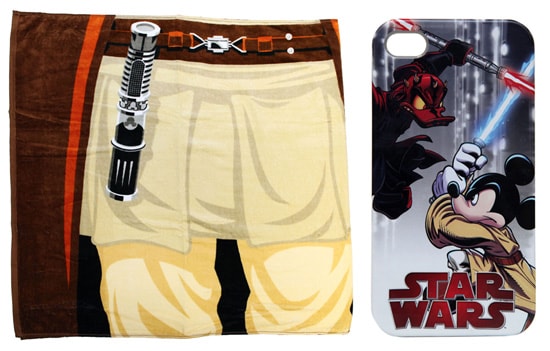 There is a beach towel that looks like the legs of a Jedi Knight (awesome!). There will also be an iPhone 4/4S case, with the fitting edition size of 1,999. 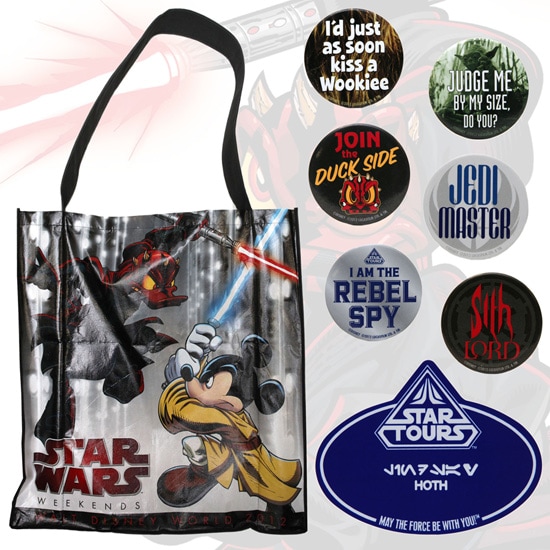 One of the more unique items is an oversized bag that contains a special side pocket to carry either a poster tube (or perhaps a lightsaber!). I also thought the six different phrase buttons were a nice addition this year. Yet I can’t wait to get my Star Tours nametag with my name written in Aurebesh, one of the alphabets used in the Star Wars galaxy.

Finally, we will have three unique action figures including Donald Duck playing Darth Maul and Savage Opress, Darth Maul’s powerful brother from the planet of Dathomir. Savage Opress, who was once also Count Dooku’s secret Sith apprentice, is featured in the animated TV series, Star Wars: The Clone Wars. Also, look for the limited release figure of Rizzo from The Muppets, portraying Jedi Master Yoda.

For more Star Wars Weekends updates, see the posts below: