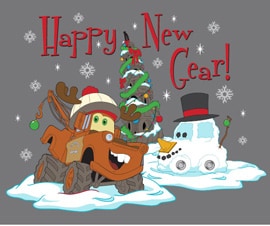 It’s official…the holidays are in high gear in Disney California Adventure park. Here are a few things that will be popping up in stores over the next couple of months that you should definitely keep on your radar.

First up are a few things to get you in the spirit of the season, from our Welcome to Cars Land – Season’s Speedings billboard collection (which appears on a tee, fleece and postcard) to our Dashing Through the Snow and Happy New Gear tees for kids. Tip: Look for these art images on mugs, too, for those needing a little bit more of a kick start in the morning.

If you like what you’ve seen so far, get ready, because these next items are going to make you stop in your tracks. For you Disney fans who have scoured every inch of Cars Land, you’ve probably noticed the Pixar images of Radiator Springs on the display rack in the Cozy Cone Motel lobby – now look for some of these images on tees, fleece, mugs, key chains, magnets and postcards. And for those of you in the mood to “cozy” up this winter, you have come to the right place: Cozy Cone Motel tees are all the rage, so be sure to pick one up.

Now for those fans with more of a “Go With the Flo” attitude… consider this perfect timing! You’ll find that phrase and others like “Hubba, Hubba, Hubcaps,” “Back To My Routes,” “I’ve Taken A Shine to You” and “Ain’t No Highway Long Enough” on a variety of apparel items including tees, long sleeve shirts and tanks. So fill up! Because Flo and the Motorama Girls are cruising into Radiator Springs Curios and Ramone’s House of Body Art now.

As you race toward the finish line to complete your holiday shopping, make sure that you make one last pit stop at Ramone’s House of Body Art. Why? Because on November 26, you will find an all-new expanded location (in the space known as Lube-O-Rama) with product themed to The Curb Feeler, Sparky’s Spark Plugs, Ornament Valley Oil, The Oil Pan and even more from our Champions Custom Speed Shop collection. Under the Hood Tip: Be on the lookout for specially created collectible signs themed to Greetings From Radiator Springs and Rust-eze.

Have I driven you completely crazy? If not, then you’re bound to speed through the streets for this next set of releases. On December 8, John Lasseter, Chief Creative Officer, Walt Disney and Pixar Animation Studios and Principal Creative Advisor, Walt Disney Imagineering, will be on hand for a special appearance and signing of a new limited edition figure inspired by the Disney•Pixar “Cars” character, John Lassetire. Joining John for the signing is none other than Chip Foose, owner of Foose Design and star of TV’s “Overhaulin’,” who has created a new line of “Cars”-inspired collectibles, including a Piston Cup, “Cars” hood ornament business card holder, t-shirt, and one of his newest pieces of art, titled “Finns,” depicting Finn McMissile in front of the Cadillac Range. Special Tip: John and Chip will appear from 2-4 p.m. on December 8 at Off the Page in Disney California Adventure park. Check out all of the details at www.ArtofDisneyParks.com.

Have you told Santa Claus what you want yet? Time is ticking, so don’t miss out! Santa has taken up residence in Elias & Co., so be sure to add some of these great Cars Land-inspired items to your holiday list.

Destinations: Merchandise at Disney California Adventure Park is Definitely One For the Road