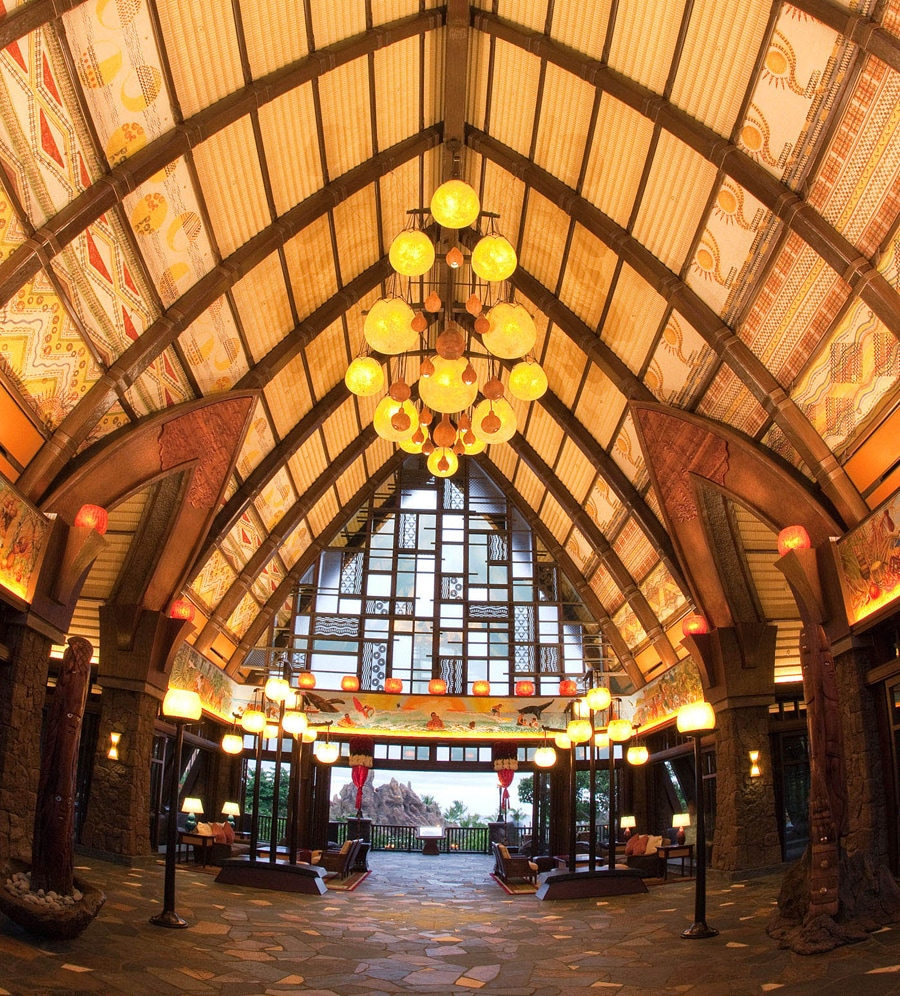 I recently had the pleasure of interviewing Joe Rohde, creative executive at Walt Disney Imagineering, about his inspirations for the design of Aulani, a Disney Resort & Spa. Joe’s career has included such iconic projects as Disney’s Animal Kingdom; Expedition Everest; Aulani, a Disney Resort & Spa; and the upcoming AVATAR-inspired land at Walt Disney World Resort. Today, Joe shares some of the magic and tradition behind what makes Aulani unlike anywhere else in the world.

What is the significance behind the arch logo for Aulani, a Disney Resort & Spa?

The curved arch is based on a traditional Hawaiian canoe house as echoed in the framing of the Maka‘ala lobby as well as in the resort’s physical layout. What was the inspiration for the Maka‘ala lobby?

Maka‘ala does several things all at once. It is a warm and welcoming place that expresses the spirit of aloha, acceptance and inclusion. But it also announces that this place – where you have arrived, Hawai‘i – is a special, unique and important place, and that there are stories to be learned here that you may not know … and LOTS of them. Lastly, it also suggests a feeling of elegance and artistry, which is consistent with true Hawaiian culture. What was the inspiration for the overall shape and design of Aulani and the Waikolohe Valley?

The resort was designed to reflect the sense of a Hawaiian valley opening out toward the ocean from highlands to lowlands. This organization has many connotations. One is the ahupua’a, the traditional organization of land that followed a watershed from the mountains to the sea and knitted all members of the community together in a working relationship and a functional sustainable relationship to the land.

Another is a Hawaiian concept of time itself as flowing – like fresh water – from the past, which is in the mountains, to the future, which is in the sea. The architectural statements of Aulani tend to follow this organizational layout.

You know, of course, that Waikolohe means “mischievous water.” That name is simply meant to connote the playful aspect of the springs, which spray you from unexpected directions, and the presence of the Menehune. It is true that, along this part of the O’ahu coast, fresh water comes from springs, and we wanted to reflect that but in a fun, mischievous way.

Hawaiian canoes are seen throughout Aulani. Why are canoes such a key aspect of the design?

We wanted to use little clues here and there to celebrate the great canoe tradition of Hawai`i, because these canoes are at the very heart of what makes Hawaiian culture Hawaiian. Without these canoes there would be no Hawaiians at all. They express the highest form of artistry, engineering, symbolic meaning, purposefulness and social cooperation that Hawaiian culture stands for. In particular, we wanted to celebrate the Hokulea, the canoe that awakened the Hawaiian cultural revival in the 1970s and continues today on its worldwide voyage.