Ninety degrees, clear blue skies and the sort of fluffy white clouds you see in magazine advertisements – it was a perfect morning to officially open the new Marketplace Boat Dock and Saratoga Bridge at Downtown Disney Marketplace.

Earlier today, I joined Vice President of Downtown Disney, Keith Bradford, along with cast members and guests who had gathered to celebrate the milestone- one of many that will ultimately take place as the property undergoes the largest expansion in its history, as it transforms to Disney Springs.

The newly-opened bridge offers a pedestrian-friendly connection between Disney’s Saratoga Springs Resort & Spa and more than 70 shopping, dining and entertainment offerings available at Downtown Disney. In addition, the Marketplace Boat Dock, now conveniently located near the Marketplace Bus Loop, provides easy access to the West Side and Pleasure Island. Guests aboard the complimentary water taxi may even learn more about what’s on the horizon (literally!) as they travel from district-to-district.

One of my favorite views of Downtown Disney is from this new vantage point; with a view of the entire complex, it’s a great reminder of how much there is to see and do (which, I’ll admit, I sometimes take for granted, since I’m here every day)! 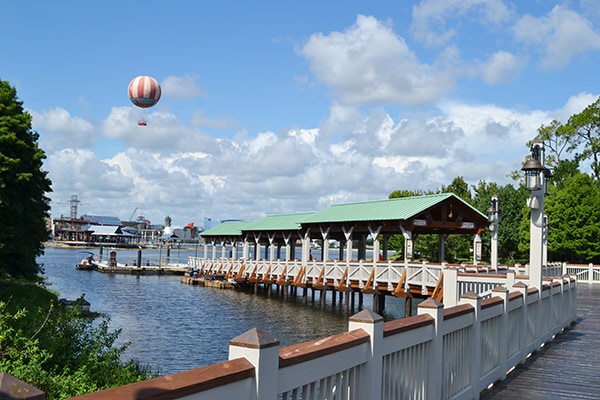 Want to experience it for yourself? The Marketplace Boat Dock operates daily starting at 10:30 a.m., weather permitting. Take a ride, then let me know what you think in the comments below!

For more on Disney Springs at Walt Disney World Resort, read the posts below: