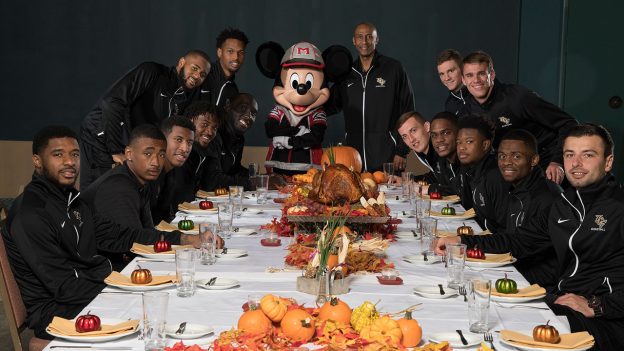 Happy Thanksgiving! Today is all about gathering with friends and family for a delicious feast, and it’s also a huge day for sports fans. Here at Walt Disney World Resort, eight men’s college basketball teams annually compete in the AdvoCare Invitational tournament at ESPN Wide World of Sports Complex.

And last night after practice, players and staff from all eight teams found time to pull up a seat at the table for Thanksgiving dinner and were joined by special guest Mickey Mouse, who posed for pictures and wished each team good luck during the tournament.

Tournament play tips off Thursday (11/23) with the UCF Knights taking on the Nebraska Cornhuskers at 6 p.m. (ESPN3).

AdvoCare is one of the premier Division I college basketball tournaments. Held annually at the sports complex, the event features some of the top collegiate teams in America.

After you and your family have had your fill of Thanksgiving fixins’, come on out to the sports complex and take in the college hoops action. Tickets and additional information can be found here.