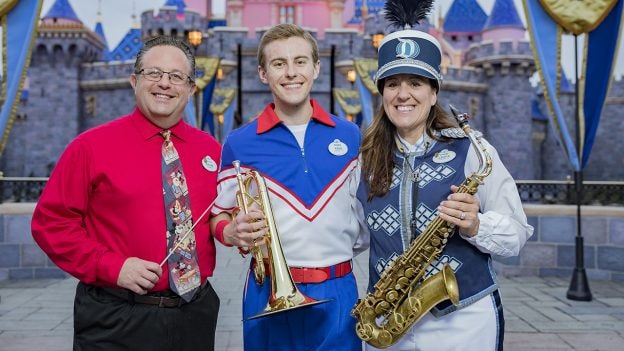 Have you seen the All-American College Band presented by Yamaha perform yet this summer at Disneyland park? The talented group of college musicians is not to be missed! After more than 300 auditions of band members from colleges across the country, this year’s lucky 21 have some unique stories.

When University of Michigan student Ryan McGee found out he was selected to be a part of the 2019 All-American College Band (a tradition at the Disneyland Resort since 1971!), he immediately called his mom and dad, who now get to call him a fellow cast member. Ryan plays the French horn, and comes from a family with deep Disney musical roots. His mom, Laura Hamlin, was a part of the All-American College Band at Walt Disney World Resort in 1989, and today strikes up the Disneyland Band as a saxophone player. Ryan’s dad, Kevin McGee, runs shows around the Disneyland Resort as a talent production specialist when he’s not working as a middle school band director. Ryan’s uncles (Laura’s brothers), Rob and Vince Verdi, performed in the Dixieland Band at Disneyland park more than 30 years ago, and still play today in New Orleans Square.

Another band member, India Anderson, will make history this fall when she heads back to the University of Southern California as the first female drum major for the USC Trojan Marching Band. Spending her summer with the All-American College Band as a tuba player is another dream come true.

Be sure to catch one of the band’s sets at Disneyland park through Aug. 9!