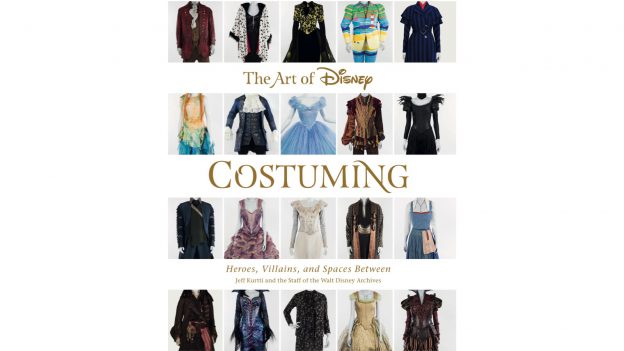 The new Disney Editions book, The Art of Disney Costuming: Heroes, Villains, and Spaces Between was inspired by the Walt Disney Archives’ exhibition Disney Heroes & Villains: The Art of the Disney Costume, which was on view last month at the D23 Expo 2019. “We’d been thinking about doing a costume book for many years,” director of the Walt Disney Archives Rebecca Cline explains. “It’s a book in its own right, but it was kind of a catalog for the exhibition, too.” This marks the first time the Archives has created a companion book for their key Expo exhibition. It goes on sale on Tuesday, September 17, 2019.

For nearly a century, Walt Disney and his creative heirs have engaged in every storytelling medium—since the earliest days of animation, through innovations in live-action filmmaking, pioneering efforts in television, location-based entertainment and retail, and even gaming. But one creative aspect of Disney has been seldom-documented, though it’s present in all: costume design. At Disney, costumes and clothing are as significant and memorable an element of building a character and telling a story as any other aspect, from script to sound, from performance to production design.

The new Disney Editions book, The Art of Disney Costuming: Heroes, Villains, and Spaces Between celebrates the imagination, passion, and attention to detail invested in each Disney costume. The elegant and adventurous array of dresses, uniforms, and other attire is a feast for the eyes and a fascinating examination of pure craft—and in praise of the brilliant, creative minds behind it.

“Much has been said and written about the significant work of the artists, animators, performers, composers, designers, and Imagineers who have brought forth the sorcery of Disney,” says Jennifer Eastwood, senior editor at Disney Editions. “Disney costume designers have never had their work examined with the same focus—until now.”

It may be surprising for many that the core subject of this new book is live-action films of the past three decades or so. “There may be an expectation that we’ll showcase wardrobe from Mickey Mouse Club, or costumes worn by Hayley Mills or Annette,” Becky Cline says. “We wanted to move the story forward here, and bring the current Disney not of the Walt era into the spotlight. It allowed us to really focus on the best in design and craft in the current Disney cinematic canon—and frankly, in the current cinematic canon, period. These are today’s top costuming talents, at the peak of their form.”

Photographic galleries (featuring images created by digital producer for the Walt Disney Archives Holly Brobst) are organized by the character archetypes of “heroes” and “villains,” and those complex, always-interesting, “spaces between,” showcasing costumes across more than thirty Disney films.

The book sets its tone of observation and education with a timeless case study: Cinderella’s ball gown. “A diverse group of designers has been called upon over the years to address and improvise the creative and practical needs each time the fairy tale Cinderella has been reimagined,” the book explains, “each project has brought with it inherent cultural challenges when bringing a familiar and beloved tale to life again and again—and all have yielded stunning and distinct results. In creating a new version of an oft-told tale, each creative mind seems to evolve the story through stages of excitement, expectation, often intimidation—and finally to inspiration and thrilling results.”

But beyond the best and brightest of modern cinematic costume design, a prologue establishes that costuming as a process originated with Walt Disney’s earliest projects and evolved through live-action movies and TV; from Mickey’s red shorts, white gloves, and yellow shoes to Davy Crockett’s iconic coonskin cap—all a huge part of designing how an audience perceives a story.

As costume designer Brianne Gillen observes, “The costume offers a glimpse into the character’s personality, and often it’s on a subliminal level. Because we all have an idea of what clothes convey, we immediately, and without even realizing, make a judgment about who a person is when we see them. A good costume designer helps the audience do this with a character.”

Naturally, costuming is a vital component of Disney Parks and Resorts worldwide. “There are hundreds of ‘actors’ on Disney stages all over the world—and not all of them are human,” the book relates. “But every one of them must be cared for like a living, breathing ‘performer’ in terms of stagecraft: sets, lighting, makeup, hairstyling, and, of course, wardrobe…Today, audiences in attractions from Pirates of the Caribbean to Splash Mountain, Spaceship Earth to The Little Mermaid ~ Ariel’s Undersea Adventure see the unique Disney-created craft of show costuming for Audio-Animatronics figures.

The text continues, “‘Since all of Disneyland’s a stage,’ a decades-old employee handbook says, ‘you’ll either work backstage to keep the show going in tip-top shape, or onstage, where your every action is subject to the eyes and ears of others.’…In the 1950s, the idea of viewing Disneyland as a show was unique and revolutionary— but not unexpected from a consummate showman such as Walt Disney…‘Uniforms are for the Army,’ the handbook continues, ‘where things must be, well…uniform. We wear costumes.’

“Each of these costumes, of course, must be designed as part of each Cast Member’s role in the overall Disney show. Over the course of decades, thousands of costumes and wardrobe accessories have been designed, and millions fabricated…Even characters such as Goofy and Donald Duck have changes of wardrobe. Mickey is reported to have more than a hundred outfits, including sorcerer, scuba diver, space mouse, sea captain, Christmas caroler—and even George Washington.

‘With more than 1.5 million costumes, the Walt Disney World Resort is one of the largest working wardrobes in the world,” Britain’s Daily Telegraph recently reported—and that’s just in Florida, one of six Disney resorts worldwide—and not including the Disney Cruise Line Service. In the United States alone, Disney Parks employ more than eighty thousand Cast Members working in positions ranging from housekeeper to monorail pilot. Inside various on-property costume warehouses, thousands of jackets, shirts, and pants dangle from a network of motorized racks that “looks like a drycleaner shop on steroids,” in the words of Disney spokesman Bob Tucker.

But each and every one of those wardrobe pieces has a storytelling task to perform.

“Over many decades, styles, materials, and stories have seen redesigns and changes in sizes, fabrics, and materials. They may alter slightly but must remain constant. ‘Mary Poppins without her distinctive costume elements just isn’t Mary Poppins,’ says Walt Disney Imagineering costuming coordinator Zach English. ‘Those things never really get ‘redesigned’.”

“Costuming is an opportunity to really become the character,” Deanna Marsigliese, character artist at Pixar Animation Studios, says. “The trick is to not think of the costume as separate from the character . . . costume choices should support the storytelling, and if they’re done well they’ll tell you more about the character themselves.”

Within the pages of The Art of Disney Costuming: Heroes, Villains, and Spaces Between, readers can explore the characters, stories, history, and currency of Disney in a whole new way, and with a different appreciation.

“The wonderful thing is that this book is really, truly focusing on the process of design and the exceptional craft,” Cline says, “and highlighting the designers as great artists—which they are.”