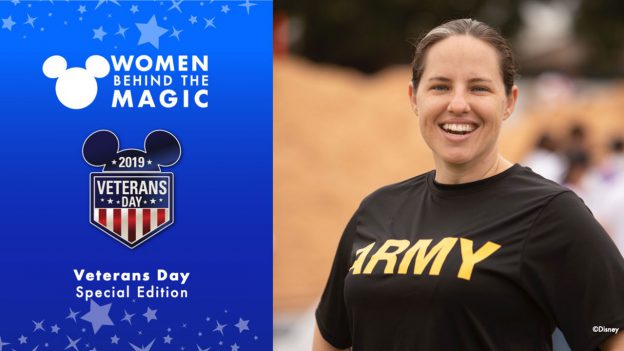 Around the globe, thousands of inspiring women bring Disney magic to guests each and every day, from designing breathtaking vistas in Star Wars: Galaxy’s Edge to crafting award-winning fine dining experiences. Continuing our month-long celebration of Veterans Day, let’s take a closer look at some of the inspiring heroes that work at Disney in a special installment of our #WomenBehindtheMagic series!

Let’s meet a few of our amazing Veteran, Reservist and Active-Duty cast members…

Briana Foster, a Labor Relations Manager at Disneyland Resort, will celebrate 17 years with the 300th Army Band in February, where she serves as a senior instrumentalist and vocalist for the unit. At Disney, she enjoys the close relationships she’s created with clients and partners and the opportunity to influence the future of the company.

For the past two years, Alexis Lohmann has been making Disney magic as the Manager at the Disney store in Tulsa, Oklahoma. Before Disney, she spent six years in the United States Air Force as a Loadmaster on C-17 aircraft where she monitored in-flight systems, loaded aircrafts and even flew groups of children home after cleft palate surgeries through Operation Smile. Whether it’s at Disney or in the Air Force, Alexis aspires to work with amazing people who care about bringing magic to those around them.

At Walt Disney World Resort, Traci Arnold is a Resort Duty Manager at Disney’s All-Star Resorts where she’s been an integral part in assisting the operation of the resort for the almost two years. She takes pride in helping create memorable guest experiences. We thank Traci for her current Military service as Director of Operations for Cyber.

At Walt Disney Imagineering, Producer Michele Hobbs facilitates the design process of construction projects at Disneyland Resort. For the past 13 years, Michele has worked on projects including, Project Stardust, Disney’s Grand Californian Hotel & Spa refurbishment, the Sleeping Beauty Castle renovation and Tropical Hideaway development. Before producing, Michele became the first female officer in the 10th Engineer Battalion. Her military service was inspired by her father and she even earned the same Army’s Basic Parachutist Badge that her father had. She completed her Army career as a Captain and instructor at the Engineer Basic Officer Leader Course, but whether it’s in the military, at Disney or in your community, Michele encourages you to enjoy your work and be passionate!

Thank you to our veterans, active duty and reservists – our nation is forever grateful for your service. Stay tuned for our next feature of our #WomenBehindtheMagic series!