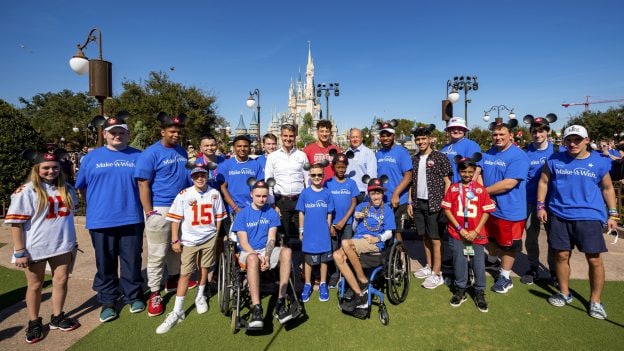 Nathaniel witnessed Super Bowl LIV live at Hard Rock Stadium in Miami on Sunday along with 18 other deserving kids from Make-A-Wish, thanks to the NFL’s largest Super Bowl wish granting act yet. With prime seats on the 50-yard line, it seemed the experience couldn’t get any more magical… until the MVP Ceremony.

During the MVP Ceremony, Nathaniel and the other 18 Make-A-Wish children, whose wishes were to attend the Super Bowl, were invited to extend their magical experiences by joining the celebration at Walt Disney World. Disney also announced a donation of $1,000,000 to Make-A-Wish in honor of Patrick Mahomes, as part of Disney’s commitment to deliver comfort and inspiration to children facing serious illnesses.

Nathaniel got the chance to join the MVP in a parade down Main Street, U.S.A. in Magic Kingdom Park. He also experienced the newest attraction at Star Wars: Galaxy’s Edge, Star Wars: Rise of the Resistance, met popular Disney characters, and spent time talking with his hero, Patrick Mahomes.  You can watch Nathaniel and the wish kids’ experience at this super celebration here:

For 40 years, Disney has been providing magic to wish kids and their families when they need it most, and this Super Bowl surprise is the beginning of a year-long celebration of Make-A-Wish and Disney’s relationship that began with the first official wish in Make-A-Wish history.  Since 1980, Disney has helped Make-A-Wish grant more than 140,000 wishes around the world. Be sure to stay tuned throughout the year as we continue to celebrate 40 years of wish granting with Make-A-Wish.