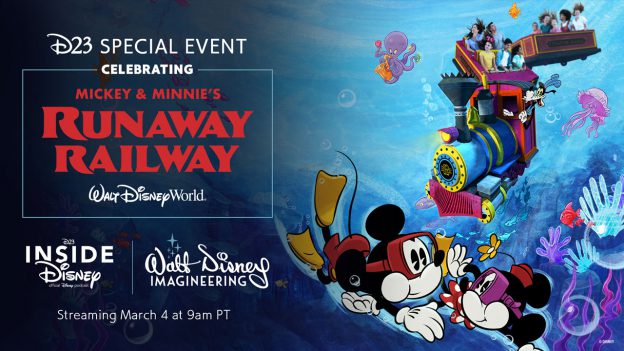 Later today, be sure to “toon in” to D23.com for a special streamed event celebrating the opening of Mickey & Minnie’s Runaway Railway at Disney’s Hollywood Studios! Go behind the scenes of the first-of-its-kind attraction with a two-part special event, brought to you exclusively by D23: The Official Disney Fan Club!

At 9 a.m. PT, a special episode of D23 Inside Disney will be on site at the attraction’s grand opening, talking with the Imagineers and creative minds to bring you inside this wild ride for a spin into Mickey’s cartoon universe!

Then, Walt Disney Imagineering will open up their doors for a special “From Sketch to Reality” program, in which Imagineers behind the ride, including Charita Carter and Kevin Rafferty, pull back the curtain during a fascinating chat that reveals some of the twists and turns of this wacky attraction.