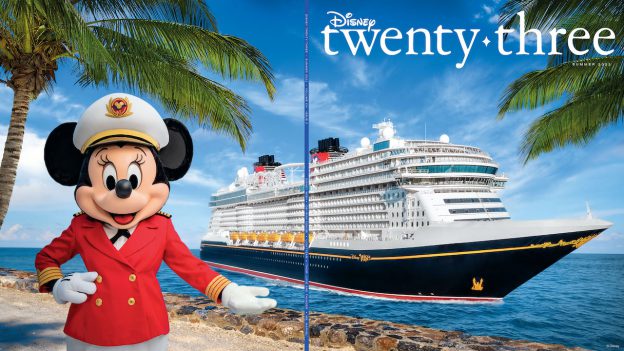 In celebration of the new Disney Cruise Line ship, the Disney Wish, D23: The Official Disney Fan Club offers an in-depth look at the liner – from bow to stern and everything in between – in the latest edition of Disney twenty-three magazine.

Eight pages of stunning photography and intricate writing paint a dazzling portrait of the newest in the Disney Cruise Line fleet, with info straight from the creative teams of Walt Disney Imagineering, Disney Live Entertainment and Disney Cruise Line Operations and Food and Beverage.

D23 takes you through every part of the new ship – from cabins to dining to on-board experiences to entertainment – to the fun little details, which make Disney Cruise Line ships so fun to explore.

From Disney Parks, Experiences and Products comes a look at the Sandtastic team – whose exotic, sand-castle creations can be seen around Walt Disney World resort at various times during the year. It also gives a first look from Disney Publishing – “Walt’s Apprentice: Keeping the Disney Dream Alive” – where former Walt Disney Company President Dick Nunis recounts anecdotes from his tenure – including stories from the 1964-65 World’s Fair, the creation of Disneyland park and other seminal events in the Disney Parks story.

Committed to bringing the latest and greatest in-depth info to their fans, the Disney twenty-three quarterly publication is exclusively for D23 Gold Members – filled with stunning photography, dazzling illustrations, and the ultimate Disney insider perspective.

Find out more about D23 Membership at d23.com/d23-membership/ and stay tuned to the Disney Parks Blog for more info on the Disney Wish!