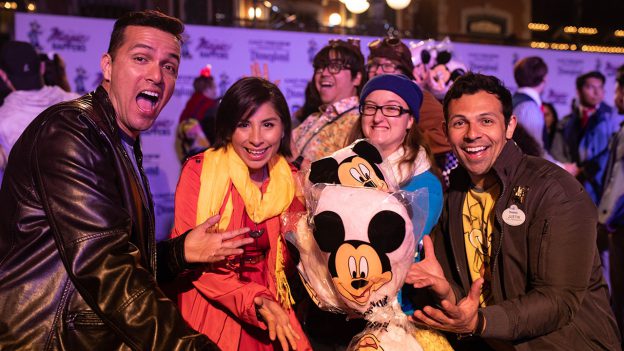 Disneyland Resort cast members were invited to an exclusive viewing of the new parade “Magic Happens” last week. More than 8,000 cast members gathered down Main Street, U.S.A. after park closing to enjoy snacks, a unique photo opportunity, as well as cheer on their fellow cast members as they performed the highly anticipated “Magic Happens” parade for the first time.

“One thing that is so cool about the Disneyland Resort is they have a cast member-first culture, that’s why we’re able to see such amazing things, such as ‘Magic Happens,’” says Professional Intern Ryan Williamson.

This preview is just one of many exclusive opportunities for cast members at the Disneyland Resort. From summer canoe races around the Rivers of America to first looks at the resort’s newest entertainment and attractions, cast members are at the forefront of the magic happening within the parks.

“I can’t believe that I get to work for a company where you get the opportunity to see a parade before everybody else,” says Tomorrowland Food & Beverage cast member Delaney Kunkle. “I’ve been watching the concept art and following the social media, now to be here to see it is a dream come true.”