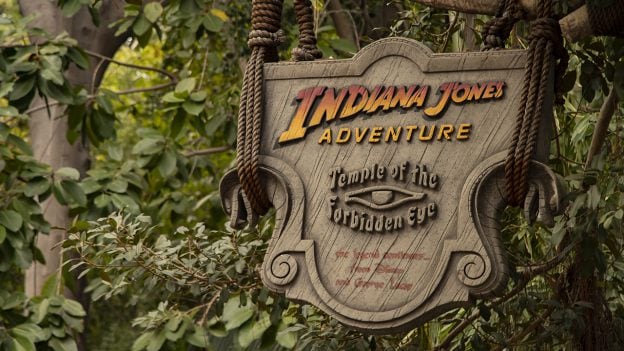 Grab your fedora and bullwhip! Today, Indiana Jones Adventure is celebrating 25 years as one of the most thrilling rides here at the Disneyland Resort. On March 3, 1995, the Temple of the Forbidden Eye that was discovered by Indiana Jones was opened for guests to explore in the heart of Adventureland. Since then, it has brought ancient secrets and a suspense-filled journey to guests of Disneyland park. Let’s put our archeology skills to the test and dig into the history of the attraction.

Based on the Indiana Jones films, Indiana Jones Adventure features exotic chambers, hidden gems and suspense around every corner. As you climb aboard the jungle transport and look into the eyes of the deity Mara, you are suddenly taken on a high-speed journey as you work to escape the wrath of the vengeful goddess. The attraction was created through a collaboration between George Lucas, the creator of the Indiana Jones franchise, and Walt Disney Imagineering.

When the attraction first opened, it was the largest attraction at Disneyland and increased the size of Adventureland by 33 percent. When Imagineers were developing Indiana Jones Adventure, they thought of featuring an out-of-control mine car, similar to the one that is found in “Indiana Jones and the Temple of Doom.” However, Imagineers ultimately decided against the mine car since Disneyland already had one in Big Thunder Mountain Railroad. However, the mine car idea still made its way to the attraction in another way. As you walk through the exit of the attraction, you will see a mine car that was used in the filming of “Indiana Jones and the Temple of Doom.”

In addition, one of the German patrol trucks that was featured in the first Indiana Jones film “Raiders of the Lost Ark,” can be found in the outside queue area of the attraction. When you look closely, you will see golf balls on the handlebars of the front bumper that were placed there for one of the car chase stunts in the film. Lastly, while on the attraction, the music you hear is the original score from the Indiana Jones films that was adapted, arranged and recorded for the ride.

When building the Temple of the Forbidden Eye for Indiana Jones Adventure, inspiration for the sandstone temple came from the Hindu temples at Banteay Srei and Angkor Wat in Cambodia and the Mahamallapuram, Virupaksha and Elura temples of India. Inside the temple, you will find more than 1,300 props throughout the queue, more than 168,000 square feet of hand-carved surfaces, a 45-foot-tall decaying skull of Mara, a 100-foot-long King Cobra, more than 2,000 replicated human skulls and 2,129 snakes.

The Play Disney Parks app* recently added an in-queue experience to Indiana Jones Adventure entitled “Indiana Jones Adventure – the Gifts of Mara.” This game allows you to decode ancient glyphs, symbols and codes along the queue of the attraction. The translated code comes together to complete a map that unlocks digital achievements and a special message from Mara herself.

Can you avoid the eyes of Mara and find the great treasures you seek? Head on over to the Disneyland Resort to brave unimaginable perils and celebrate 25 thrilling years of Indiana Jones Adventure.

If you are looking to celebrate the anniversary of this fan-favorite attraction, check out these engaging experiences and fun offerings that every archaeologist must discover!

*Available for iPhone® and AndroidTM smartphones.