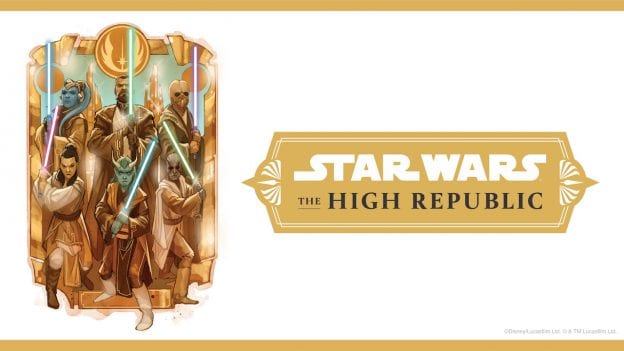 The First Publishing Works for Star Wars: The High Republic Land on Shelves

The Force is strong! The first publishing works for Star Wars: The High Republic, an all-new epic series of books, novels, and comics, is now available!  Whether you’re a core fan or new to Star Wars, young or young-at-heart, this vast, interconnected saga brings a new era never before seen in the Star Wars galaxy.

In this new saga, five high-profile, fan-favorite Star Wars authors tell an epic, interconnected story – across multiple publishers and formats for different age groups – establishing a new timeline of Star Wars storytelling for generations to come. This initial release of Star Wars: The High Republic works include Light of the Jedi, an adult novel by Charles Soule; A Test of Courage, a middle grade novel by Justina Ireland, and a Marvel comic book series and children’s picture book, both by Cavan Scott. Additional titles will come in February including Into the Dark, a YA novel by Claudia Gray, and The High Republic Adventures an IDW comic series for fans of all ages by Daniel José Older.

The era of The High Republic takes place centuries before The Phantom Menace and the prequel trilogy, during a golden age of the Republic, when the Jedi Order are in their prime. Noble and wise, the Jedi serve as protectors in a much more peaceful and prosperous time in the galaxy.  The story begins as the Jedi face The Great Disaster, an intergalactic catastrophe that spins the galaxy in a dangerous new direction.

You’ll be introduced to a new group of courageous heroes, as well as menacing villains. The young, diverse Padawans run the gamut of skill, devotion, and personality.  Keep a look-out for Burryaga, a Force-sensitive Wookiee who is skilled with a broadsword-like lightsaber in Light of the Jedi; Vernestra “Vern” Rwoh, a teenage Jedi Knight with a lightwhip in A Test of Courage, and even some familiar faces like Yoda.

With new heroes comes a barrage of new villains to terrorize the galaxy including the Nihil—dangerous marauders who wreak havoc from the Outer Rim- and the menacing Drengir, a carnivorous plant-like species with tentacles and teeth!

In February, look for Into the Dark, a young adult novel by Claudia Gray and Star Wars: The High Republic Adventures, an all-ages comic book series by Daniel José Older.

Lucasfilm’s Publishing and Story Group teams have carefully crafted this initiative, and these books, comics, and magazines are being published by Disney Lucasfilm Press, Del Rey, IDW Publishing, Marvel, and more. The authors of this publishing initiative also participated in a virtual launch event today, where they shared insights about what to expect, as well as some new announcements:

For more exciting details, check out the story we first shared with you on the Disney Parks Blog. You can purchase the first books from Star Wars: The High Republic here, or wherever books are sold.