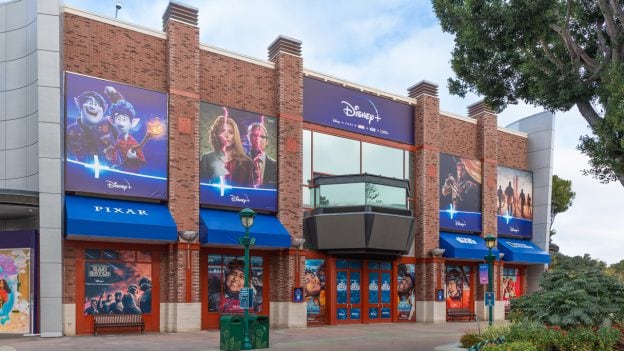 If you’re anything like me, you’ve been enjoying the latest releases and greatest favorites from Disney, Pixar, Star Wars, National Geographic, and more on Disney+. Now you can find fun photo opportunities and art decorating the Downtown Disney District at Disneyland Resort celebrating movies and series coming to the streaming service.

The Mighty Ducks: Game Changers – Set in present day Minnesota, the Mighty Ducks have evolved from scrappy underdogs to an ultra-competitive, powerhouse youth hockey team. After 12-year-old Evan Morrow (Brady Noon) is unceremoniously cut from the Ducks, he and his mom, Alex (Lauren Graham), set out to build their own team of misfits to challenge the cutthroat, win-at-all-costs culture of youth sports today. With the help of Gordon Bombay (Emilio Estevez), they rediscover the joys of playing just for love of the game.

Big Shot – After getting ousted from the NCAA, a men’s basketball coach is given a chance for redemption with a coaching position at an elite private high school. He soon learns that the teenage players require empathy and vulnerability — foreign concepts for the stoic Coach Korn (John Stamos). By learning how to connect with his players, Marvyn starts to grow into the person he’s always hoped to be. The girls learn to take themselves more seriously, finding their footing both on and off the court.

Star Wars: The Bad Batch – The series follows the elite and experimental clones of the Bad Batch as they find their way in a rapidly changing galaxy in the immediate aftermath of the Clone War. Members of Bad Batch—a unique squad of clones who vary genetically from their brothers in the Clone Army—each possess a singular exceptional skill that makes them extraordinarily effective soldiers and a formidable crew.

Cruella – Academy Award winner Emma Stone stars in Disney’s “Cruella,” an all-new live-action feature film about the rebellious early days of one of cinemas most notorious – and notoriously fashionable – villains, the legendary Cruella de Vil. The film will release simultaneously in theaters and on Disney+ with Premier Access for a one time additional fee on Friday, May 28.

Also, in celebration of Asian Pacific American Heritage Month, Disney+ is proud to honor the stories and voices of the diverse Asian American and Pacific Islanders community—from beloved family adventure films to imaginative animated shorts to captivating docuseries in the Celebrate AAPI Heritage set. And I’m excited to share that the “Raya and the Last Dragon” art installation designed by Imagineer Xiao Qing Chen will be on display at Downtown Disney District through May in celebration of Asian Pacific American Heritage Month as well.

Photo opportunities and art will change throughout the year, so keep an eye out for the latest from Disney+ on your next visit to Downtown Disney District.  Be sure to check out World of Disney or scan the shopDisney QR codes located nearby for official Disney+ merchandise.

With more than 13,000 series and movies, there’s a lot to choose from. What’s your favorite thing to watch right now on Disney+?