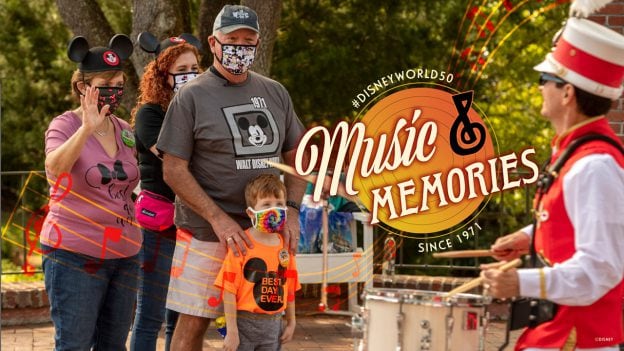 On Oct. 25, 1971, a 1,076-member marching band paraded down Main Street, U.S.A. in celebration of Walt Disney World Resort’s grand opening. With trombone in hand, Dave Phillips was among the marching musicians, stepping to the beat of “76 Trombones.” Nearly 50 years later, Dave returned to Magic Kingdom Park during the holiday season to walk down Main Street, U.S.A. once more, this time with his 5-year-old grandson, Gideon.

Dave remembers the historic day with fondness. The official Grand Opening Parade was led by Mickey Mouse himself and involved 4,000 world-class entertainers, including a large cast of beloved Disney characters, Herald Trumpeters from the United States Army Band and a mass choir.

Music has always been important to Dave and his family. Dave’s father, who was a music teacher in Central Florida, encouraged him to play trombone for his high school band. After missing the in-person Grand Opening Parade audition, Dave sent in a cassette tape to demonstrate his talents. He was later chosen to join the 1,076-member marching band, directed by “The Music Man” composer Meredith Wilson.

All these years later, the magic of the grand opening is still as alive as ever at Walt Disney World. During his visit, Dave had the opportunity to share that magic with his grandson and watch the current Main Street Philharmonic band march down Main Street, U.S.A.