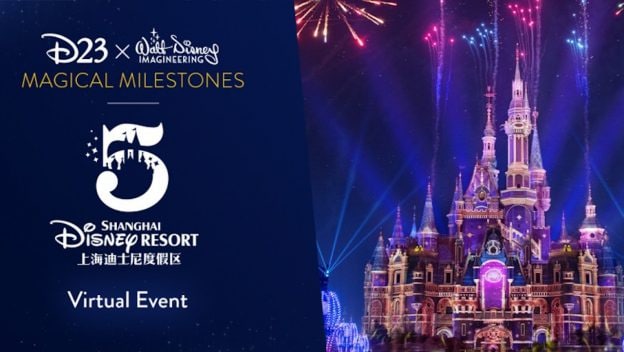 Hard to believe it was just five years ago that Shanghai Disney Resort opened its doors to guests for the first time. On June 16, to mark the occasion, D23: The Official Disney Fan Club invites you to join us for D23 x Walt Disney Imagineering Magical Milestones – Shanghai Disney Resort 5th Anniversary. This exclusive virtual event includes an unbelievable roster of Imagineers who will take guests on a journey from the park origins and history, to beautiful artwork and storytelling, to behind-the-scenes stories on the creation of this remarkable resort.

Guests will also hear about upcoming attractions and entertainment at the new “Mickey’s Storybook Adventure” and nighttime spectacular “Illuminate!,” as well as a special sneak peek at the all-new “Zootopia”-themed land coming soon!

The event is complimentary for D23 Gold Members and $10 for D23 General Members. Visit D23.com for complete details on the event.