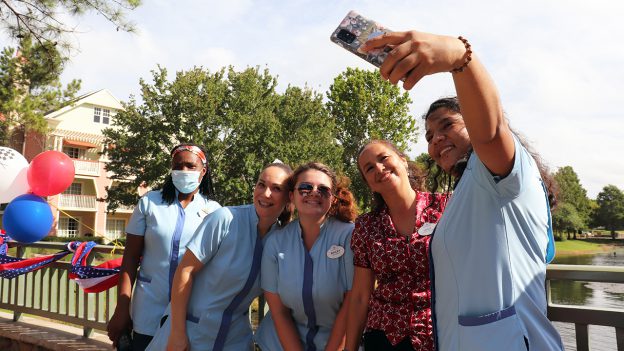 Disney’s Saratoga Springs Resort & Spa cast members and guests are off to the races … the horse races, that is!

The resort celebrated its annual Race Week — a nod to the Travers Stakes thoroughbred horse race that takes place at the resort’s namesake, Saratoga Springs, New York. Both cast members and guests participated in special activities to mark the week leading up to the 152nd Travers Stakes race.

“There really is a lot to our heritage at Saratoga Springs,” said Recreation Guest Experience Manager Derrison Steer, who helped lead the Race Week celebrations. “The Travers Stakes is not just about horse racing. In Saratoga, they’re known for art, history, a focus on wellness and health … those are all things that we do here. This is our chance to showcase it.”

And the teams showcased it in style. In addition to special horse-themed bingo games and trivia about Disney horses, cast members like lifeguard Rachel Tammone sported themed accessories, wearing bows in honor of the horse race.

“It’s a great way to make a connection with our guests that we wouldn’t get to, normally. As cast members, we get to add a little flare,” Rachel said.

Canoes play a special role in Race Week, as well. Each year at the Travers Stakes, a canoe is painted in the colors of the reigning champion and launched into a pond at the center of the track. At Saratoga Springs Resort & Spa, both guests and cast members are celebrated as champions, so they were invited to decorate canoes of their own.

Cast members from every area of the resort transformed miniature canoes into full scenes, which were displayed for guests in common areas throughout Race Week so they could vote on their favorites. The winners received special ribbons, a nod back to the ribbons earned in horse racing. This tradition gives Saratoga Springs Resort & Spa cast members a chance to share their creativity and passion for all things Disney. Some of the canoes scenes this year were inspired by Disney and Pixar’s “Luca,” “20,000 Leagues Under the Sea” and “Frozen 2.”

Guests were also invited to leave their mark at the resort by decorating a full-sized canoe together throughout the week with special recreation activities.

“Our guests get to put their own touch on it,” said Recreation cast member Kimma Barger. “I’ve seen them add their handprint, the year, why they’re here, they’ll draw their favorite Disney character … they make it their own.”

Cast members and guests gathered together Friday morning in a special ceremony to launch the canoe into a pond at Saratoga Springs Resort & Spa, marking the end of another year’s Race Week. Guests were able to see their handiwork in the water throughout the weekend to remind them of the celebration … a celebration that the resort’s cast members take great pride in sharing.

“We’re making the magic of our resort come to life,” Kimma said. “When you come visit us, have fun, and enjoy learning about the heritage of Saratoga Springs.”