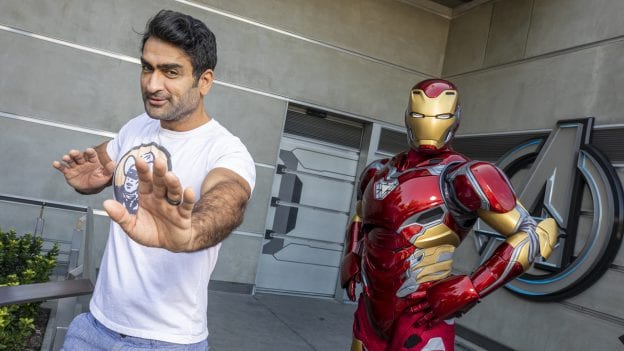 We caught up with Kumail shortly after he tested his super powers on WEB Slingers: A Spider-Man Adventure, which he shared was a workout for his arms. You read that right, training to become a Super Hero takes work. He would definitely know!

As part of his tour, Kumail also encountered Iron Man himself outside of Avengers Headquarters for a few heroic moments before heading over to Guardians of the Galaxy – Mission: BREAKOUT! … And that was just the beginning of his day in the Campus.

Coming to theaters November 5, “Eternals” features an exciting new team of Super Heroes in the cinematic universe, ancient aliens who have been living on Earth in secret for thousands of years. In the film, an unexpected tragedy forces them out of the shadows to reunite against mankind’s most ancient enemy, the Deviants. As we previously mentioned, later this fall at Disney California Adventure park, you may encounter members of the Eternals team on future expeditions to Avengers Campus.