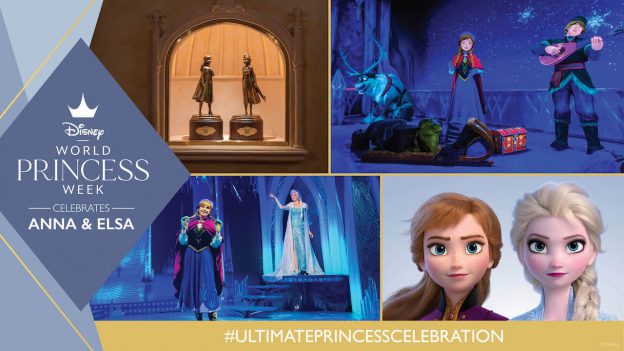 Can you believe we’re nearly at the end of World Princess Week? I hope you’ve had as much fun celebrating these heroes as I have. Today we have a two-fer, as we honor “Frozen” queens and sisters, Anna and Elsa. First, let’s look at Anna: She is uninhibited and sincere. She doesn’t judge; instead, she sees the best in everyone. From befriending a talking snowman to defending a sister whom others have feared, Anna always follows her heart and trusts her instincts.

Then, there’s Elsa. Elsa bravely faces her fears. From confronting unknown dangers to uncover the past, to taking her true place in the world, Elsa boldly follows her heart and instincts, unafraid to discover where they might lead. Self-assured and calm, Elsa doesn’t question who she is or why she’s different; she embraces her unique qualities and sees them as a gift. We all have the gift of being able to see these courageous sisters across our parks and resorts, so read on to find out where you could find them, and how you can celebrate them from home!

Voyage to Arendelle aboard an ancient Nordic vessel as you take a musical tour of the wintery world of “Frozen” on “Frozen Ever After,” located in World Showcase at EPCOT at Walt Disney World Resort. It’s a song-filled journey where you’re likely to see Anna, Olaf, and more! Over at Disney’s Hollywood Studios, you’ll melt over “For the First Time in Forever: A Frozen Sing-Along Celebration.” Watch as thrilling moments from the movie play on-screen, and enjoy the stories, songs, and special guests. If you’re nervous to sing along, don’t be; the lyrics are projected, so you can just belt it out and “Let it Go!” Then, stop by Frozen Fractal Gifts for a flurry of apparel, costumes and toys inspired by Anna, Elsa, and friends.

Guests are stopping to wave hello to Anna and Elsa as they ride on a float along Main Street, U.S.A., and on to “it’s a small world.” This cavalcade, with music from “Frozen,” occurs multiple times a day at Disneyland park. You might also have an Anna and Elsa sighting on Buena Vista Street at Disney California Adventure park, as they’ve been known to visit there, too! Once the sun sets, get ready to light up the night with Mickey’s Mix Magic, an extravaganza bursting with exciting lights and lasers, kaleidoscopic projections, and a sequence featuring Elsa singing fan favorite “Let It Go”!

Everyone knows that Olaf loves summer, so he must be pretty excited for the Disney Wish— the newest ship to join the Disney Cruise Line fleet— to set sail in the summer of 2022. On board, your favorite characters from the kingdom of Arendelle will be featured in new and unique ways, starting with Disney’s first “Frozen”-themed theatrical dining experience, Arendelle: A Frozen Dining Adventure. Picking up the story where Walt Disney Animation Studios’ “Frozen 2” left off, Elsa and Olaf will host an engagement party for Anna and Kristoff, with live entertainment by “local” musicians who specialize in Nordic renditions of familiar “Frozen” songs. Throughout the meal, guests will even get the opportunity to join the festivities with fun table crafts, hilarious sing-alongs and a grand finale that’ll have everyone in the audience on their feet. Who’s excited?!

The Castle of Magical Dreams stands proudly as the centerpiece of Hong Kong Disneyland, and it is inspired by such courageous stories as Anna and Elsa’s. The storybook inspired architecture of Anna and Elsa’s tower includes a light blue shingled roof reminiscent of Elsa’s icy blue dress. The shimmering silver finial on the tower takes the form of a 3-dimensional snowflake, inspired by Elsa’s ice magic and the snow that propels her on her adventure with Anna.

Last year, Hong Kong Disneyland kicked off summertime in style with “Follow Your Dreams,” a first-of-its-kind, live outdoor musical party staged against the backdrop of the Castle of Magical Dreams. Watch as your favorite characters such as Elsa take the stage, accompanied by magnificent large-scale props and effects such as fog jets, sparklers, and bubbles.

Looking ahead, there is a flurry of exciting “Frozen”-themed news to look forward to. A new, immersive “Frozen”-themed area is coming to Hong Kong Disneyland, where guests will be able to visit the kingdom of Arendelle, with all its sights, sounds, cuisines, and traditions. This area will be home to two exciting attractions: Wandering Oaken’s Sliding Sleighs, where guests will be helped by Olaf and Sven as they pull their sled to the top of the lift and then send them on their way; and Frozen Ever After, the popular attraction at EPCOT, which will make its debut in Hong Kong. So exciting!

Warm up your vocal cords for “Frozen: A Sing-Along Celebration” at the Evergreen Playhouse at Shanghai Disneyland. Join Anna, Elsa and Kristoff for an interactive sing-along performance of some of the film’s most iconic songs! After you’ve sung your heart out, head over to Enchanted Storybook Castle, where you’ll see a “Frozen” mosaic mural, featuring Anna, Elsa and Olaf.

On Mickey’s Storybook Express, the train is leaving the station! Mickey Mouse leads this train-themed parade, which includes such beloved characters as Anna and Elsa. The sisters also make an appearance in Mickey’s Storybook Adventure, a live theater performance now showing at Shanghai Disneyland.

If you’re looking for even more thrilling “Frozen” news to look forward to, look out for Fantasy Springs, a new themed port coming to Tokyo DisneySea, being developed together with a new Disney hotel. Both are scheduled to open as part of the large-scale expansion of Tokyo DisneySea park. Fantasy Springs will be the eighth Tokyo DisneySea port, and it will include an area inspired by—yep, you guessed it—“Frozen.”

At Disneyland Paris, skate over to Animation Celebration where you can take a selfie with Anna and Elsa. You may also see them on a float that goes by throughout the day. Fans of “Frozen” will have a lot to look forward to in the coming years at Disneyland Paris as well. A new themed area dedicated to the beloved franchise is part of the multi-year expansion of the Walt Disney Studios park.

For those of you who have been warming up your pipes at all the “Frozen” sing-alongs, you should be ready to “Show Yourself” when you belt out your favorite tunes with the Jakks “Frozen 2” Sing Along Elsa Doll. If you have stage fright, Elsa can sing on her own, too. With color-changing lights that match the music, it’s like a live show in your own home! If you’re taking the show on the road, keep all your snacks cool in a “Frozen 2” Lunch Bag, which even comes with two stackable food containers. To wind down a day of “Frozen” fun with the little ones, read Anna, Elsa and the Secret River. Kiddos will love the beautiful art that ties into the magic and adventure of “Frozen 2.”

In the seventh and final episode of Courage and Kindness Club series, journey to Arendelle with Anna and Elsa as they discuss family, and get ready to make a family portrait, celebrating the amazing people and pets that make up your own chosen family.

To round out the celebration of the spirited, loving Anna and the confident, powerful Elsa, watch Walt Disney Animation Studios’ “Frozen,” “Frozen 2,” and “Once Upon a Snowman,” now streaming on Disney+. It’s the perfect way to end World Princess Week! I hope you’ve enjoyed this week as much as I have, and let’s all continue to exhibit our own traits of courage and kindness!