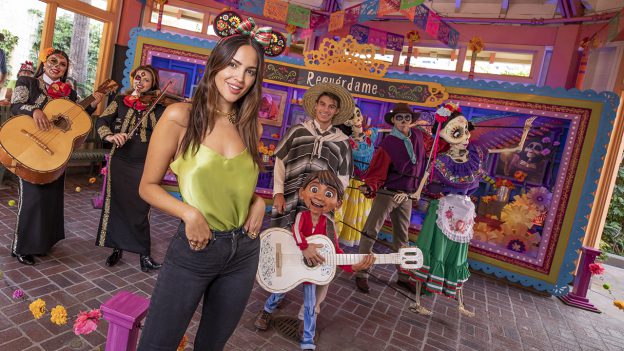 It’s fall time and the weather in Southern California has been absolutely amazing recently (seriously, when is it not?!), but this past weekend was especially beautiful and some of our favorite stars came to play during Halloween Time and Plaza de la Familia festivities at Disneyland Resort.

Sarah Michelle Gellar slayed alongside Vampire Mater in Cars Land at Disney California Adventure park where Mater, Lightning McQueen, Cruz, Red and the residents of Cars Land have transformed the town of Radiator Springs into “Radiator Screams.” It’s awesome! Aside from enjoying seeing the Cars in their “car-stumes,” I really love checking out all of the details in the land this time of year, where car parts, tools, parking cones and more have transformed into popular Halloween spooky décor. It’s also a blast taking a spin on popular Cars Land attractions that rev up with Halloween spirit.

At Disneyland park, we caught up with Jonathan Scott and Zooey Deschanel at the steps of the Disneyland Railroad train station on Main Street, U.S.A., where Goofy, Donald and Pluto stopped by donning their Halloween finest. I like strolling by here often as you never know who may pop by. There are, of course, other characters throughout the park, including some of my favorite villains!

Just a few steps away, the couple also posed for a photo at the Mickey Mouse jack-o’-lantern, aka, the most photographed spot during Halloween Time in the entire Disneyland Resort! The jack-o’-lantern is quite the centerpiece of the Main Street Pumpkin Festival which transforms Main Street, U.S.A., with whimsical pumpkins displayed all throughout.

Another awesome photo location is the exterior of Haunted Mansion Holiday, which features a merry makeover of the beloved eerie estate. Jack Skellington is behind the mayhem, decorating the mansion with frightfully festive touches inspired by “Tim Burton’s The Nightmare Before Christmas.” There’s magic everywhere.

It’s so hard to pick a favorite! What are some of your favorite photo ops and attractions this time of year?