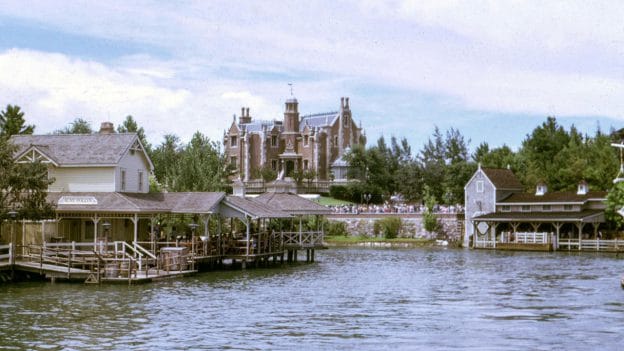 Walt Disney World Memories: Room For One More at the Haunted Mansion

For more than 50 years, guests have come face-to-face with the 999 happy ghouls, ghosts and goblins in the Haunted Mansion at Magic Kingdom Park. My first otherworldly encounter with this opening day attraction was in July 1983. Prior to that visit, I had never been inside a haunted house. Seven-year-old me only listened to the attraction during that first trip as I had buried my head in my mother’s lap throughout the ride. Five years later, I finally saw the playful spirits and quickly fell in love with the mysterious mansion. With today being Halloween, let’s revisit this Disney Parks classic for The World’s Most Magical Celebration.

Throughout 1970, construction for this attraction moved quickly in Florida as Walt Disney Imagineers had produced props, set pieces and Audio-Animatronics figures for both the Disneyland and Walt Disney World versions at the same time. The show building was one of the first buildings to be completed at Magic Kingdom Park in spring 1971.

Unlike the New Orleans-inspired mansion that opened at Disneyland park in August 1969, the Florida version resembles a great mansion possibly found in upstate New York’s Hudson River Valley. With its Gothic revival architectural style, I always feel an “aura of foreboding” while approaching the exterior.

For the attraction’s opening in 1971, the tombstones were created using the same molds as the ones found at Disneyland. Years later, they were replaced in Florida with real stone versions.

In early 2002, spirits communicated from regions beyond that a new headstone would soon materialize outside the mansion. I quickly set out with my film camera to capture images of Madame Leota’s tombstone, which is a tribute to Walt Disney Imagineer and Disney Legend Leota Toombs Thomas. She appears as the disembodied fortune teller in the séance room scene. Don’t blink or else you might miss some extra magic.

The mansion’s graveyard was expanded in 2011, adding spooky new tombstones and crypts that guests can interact with on their way into the attraction.

Nighttime is my favorite time to visit. In Oct. 2002, Disney Parks Merchandise held the “999 Happy Haunts Ball,” a themed event at Magic Kingdom Park celebrating this beloved classic attraction. I again brought my camera to capture the hauntingly beautiful mansion and pet cemetery nearby.

I invite you to “hurry back” to the Haunted Mansion in these next 18 months as Walt Disney World Resort celebrates its 50th Anniversary. Just beware of hitchhiking ghosts if you should decide to join us. Be sure to follow Disney Parks Blog and #DisneyWorld50 on social platforms as we continue documenting this incredible time in our history.